JDI Productions Inc. was founded in 2008 by Derek Iorfida and a small group of individuals; a gang of outliers convinced there was a better way to do things, and that way was the JDI way. Armed with just four cases of par 38’s and a speaker package just big enough to be designated a P.A., they soon added 24 Color Kinetics ColorBlasts to their arsenal and “put our best foot forward, pounding the lighting world pavement looking up their many industry contacts.”

With small weddings as their meat-and-potatoes business, early gigs tended to be in the small corporate market. Local event planners knew they could rely on JDI to deliver. This being Rhode Island after all, the company did a lot of small corporate parties, too. Small club shows added to their first growth spurt. “We stay loyal to our roots,” says Iorfida, “still servicing our original customers along and now, not only continuing to do rental shows in small venues, we’re adding installations to 2,000-seat venues.” 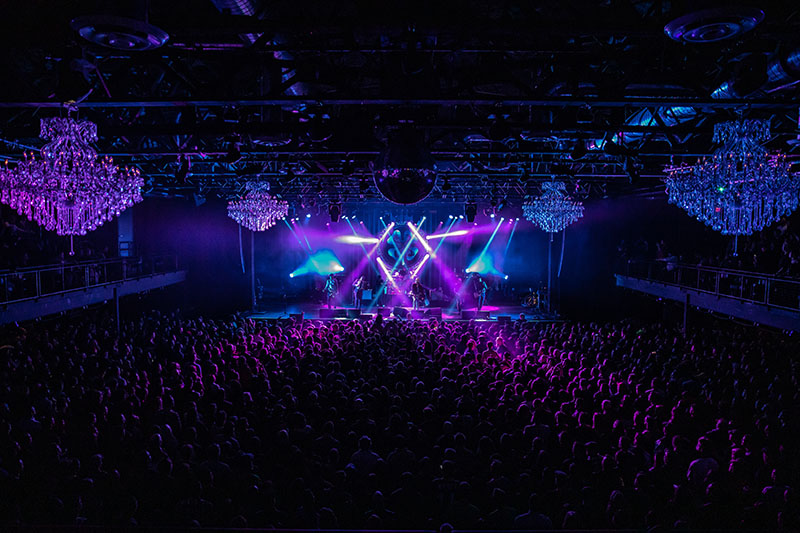 JDI’s first “big break” came in 2010 with work stemming from one of the large sound installation camps at Burning Man, Roots Society. Based in Boston, they asked JDI to help them with lighting at Burning Man. “We invested pretty much every penny we had in a large enough lighting inventory to do the show, and it paid off. A lot of doors opened for us, and JDI got a lot of exposure.”

Most notably, they wound up in Miami at Ultra Music Festival doing all the production for one of the stages, which led to exposure and work in the lucrative corporate market in southern Florida. With the deposit for the Ultra contract, JDI established a pattern of reinvesting in the company by purchasing a large inventory of lighting equipment to meet the spec.

Upon seeing the still-usable but vintage High End Systems gear in the above the Ultra Music Festival stage, LD Steve Lieberman remarked, “I can’t believe you guys are still walking around with those Coke cans with a lens in it!” Nevertheless, a near flawless show and the JDI staff’s commitment to the success of the show made their Ultra Fest client loyal for years to come. From 2011-2015 JDI provided lighting for the main stage of the traveling Gathering of the Vibes festival for Deadheads in the Northeast, including the final incarnation of the festival’s 20-year run in 2015, which was staged in Bridgeport, CT.

With the team working full steam ahead on all fronts, touring operations manager (and one of the original employees) Cody James secured the lighting contract for Yellowcard in 2012 after he had been named lighting designer for the band. JDI did all their tours for the next five years prior to their breakup in 2017. 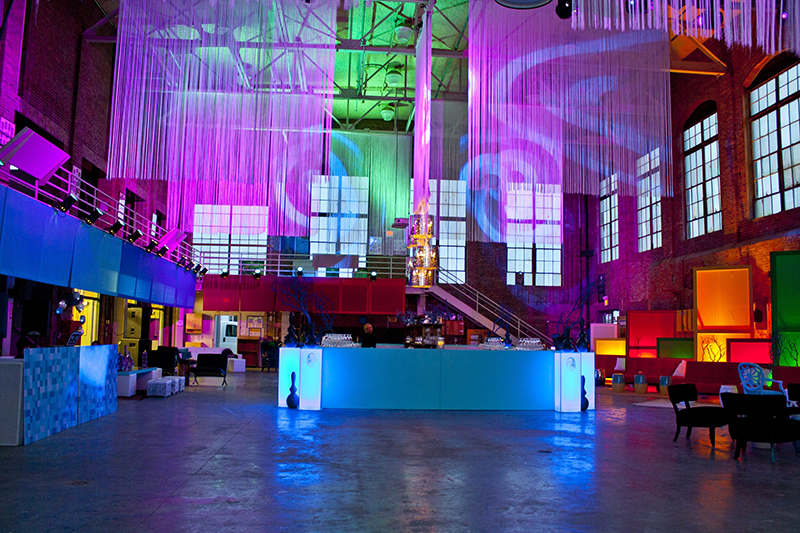 Lighting up the annual gala for the International Yacht Restoration School in Newport, RI.

For its first two years, JDI was able to house its par 38’s and small speaker system in about 1,000 square feet of space, but as the company grew, it expanded its footprint as well, adding a 3,000-square-foot building, which was used over a five-year span, then to the 15,000-square-foot facility, built in 2013, that they occupy now. They have an additional 7,000 square feet of overflow in two other buildings “full of equipment containers” and trailers. “And hey,” laughs Derek, “we actually have a sign on the building — finally!” Along with the original core group of four employees — Derek and Jenna Iorfida, Cody James and Fred Thompson, the operations manager — the JDI family has grown to 14. “We do use freelancers for touring positions and use our full time employees for all local events,” Cody tells PLSN. “It really is the best way to represent the company,” he explains. “Their interests and ours are much more aligned.”

Along with their expansion to a bigger facility, 2013 marked the year that the company sought to get the JDI name in front of different parts of the country by concentrating heavily on the touring market. “I always took note of the company names rolling into the venues and onto the stages I worked at over the years,” says James. “I wanted our name to be in everybody’s face,” he adds. This year, JDI supported national tours for acts including Flogging Molly and Social Distortion, who played 5,000-to-10,000-seat venues with LD Pete Therrien working out of the Rhode Island shop. The corporate gigs they support, meanwhile, have expanded from modest affairs held in hotel ballrooms to arena-sized gigs, with the additional revenue streams of the associated breakout rooms and after-party gatherings serving as a bonus. “We are tracking the increase in business pretty well, I think.” says Iorfida.

Fred Thompson, their operations manager, saw the 2013 move into the new warehouse and office space as a real-eye opener. “I felt it was a real opportunity to figure out where the flaws in the mix were, dial ‘em in and fix them. We have adequate space to work in and new tools at our disposal. We found the separation between the carpet in the front office and the concrete floor in the warehouse,” he beams.

“Our core staff that started this off could very well be called investors,” chuckles Iorfida. A mix of technicians and lighting designers, “they invested every moment of their time, because we were at the shop 24/7. I didn’t make any money; I lived at home with my parents so I reinvested every penny the company made back into the equipment.”

Thompson says, “I looked at this as, ‘We have a shot at something. We can do our best and do it right the first time.’ That will be something that our customers see. We want the outcome of our work be clearly evident, that we always get it done right and get it done safely are conscience of everything around them. This has to be right, with a lot of pre-planning to eliminate mistakes and anticipate problems. That is our philosophy; it’s real life here.”

Having worked as employees for other companies in the past and having seen the pitfalls that occur when an employer forgets that person they are sending into the field is the one “bringing home the bacon,” the team at JDI wanted to make sure their staff felt they were a part of something bigger, not just coming to “a job.” 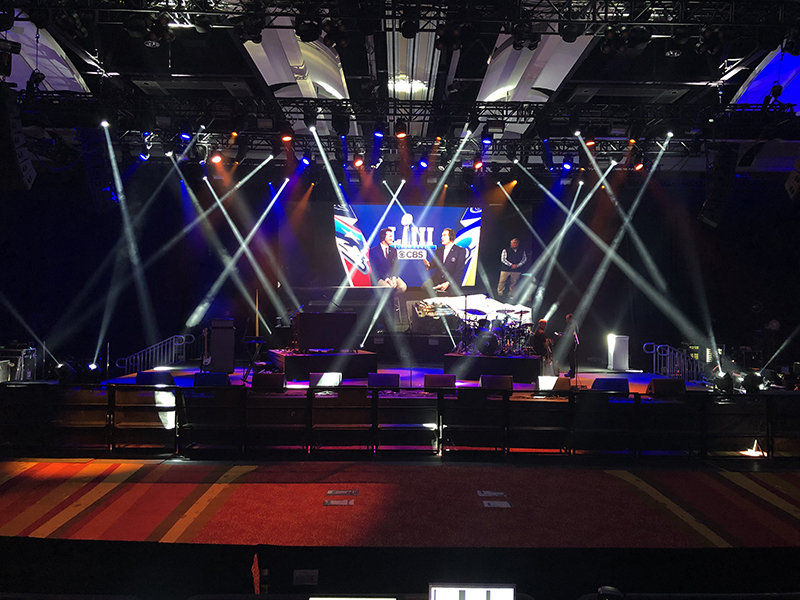 Video is the next frontier for JDI Productions Inc., and the company is investing in Chauvet F4IP panels. “We wanted an IP wall with no restrictions, so we can do both outdoor and indoor events,” Thompson says. They also plan to add the new Chauvet F2 in 2020 to satisfy their growing corporate market. “The quality is great and it comes from a company we know is going to be around in five years,” Thompson adds. “I know I can get someone from Chauvet on the phone at the same time that I’m awake working. Their huge presence in America and their reputation for backing us 110 percent made it one of the easier decisions.”

Cody points to being awarded the booth lighting design for Chauvet at LDI 2018 as not only a sign of confidence by the manufacturer, but a clear signal that both companies will enjoy a long future together.

“We are adding the Elation Cuepix16 IP RGB to our inventory in a big way for a large Killswitch Engage tour next summer in 2020,” adds Cody. “Those guys are great and have been with is from the very beginning.” They were one of the clients that followed us on our way.”

That statement brings to mind the one potential misstep the team may have made when they formed JDI. “We did not discuss with our established customers what we were getting ready to do. It was a weird way to start a business,” Iorfida admits. “We kinda just jumped and were hanging off the edge and looking at each other saying’ what are we gonna do now?

“People started calling us and asking, ‘Hey, where are you guys?’ We had worked with a lot of different people previously and had a very loyal following, because wherever we worked before we hustled, did whatever it took to get the job done. People eventually found us. The first calls I got were along the line of, “Hey dude, where did you go? I’ve got this problem I need fixed and nobody is around to help me.”

The company quickly recognized the importance of balancing its growth ambitions with “keeping our long time core customer base satisfied, which is part and parcel of the family oriented business JDI has built,” Iorfida says. It’s “an image we not only embrace, but live,” he adds. “Every person in this building represents JDI and what it stands for.”

As part of its service and support package, JDI has a programming studio, notes Cody. “We have all the major brand consoles, and there is an Iron Maiden pinball machine in there, too! We try to do all our design work in house, but we do offer this service as available for LD’s and programmers outside of the tours we do. It is a good space for these guys to get away from their home and into a quiet space to design their shows,” Cody adds, noting its value as “a business tool.” The company can also can provide limited rigging support, but “when it gets too big, we turn it over to United Staging or Show Rig Boston (SGPS).

Jenna Iorfida oversees the house rig installations. They have systems in the 1,980-seat Strand Ballroom & Theatre in Providence, RI and the Palladium in Worcester, MA. “Between those, we do about 250 shows a year,” she notes. “Besides the main system in house, we also supply any additional equipment bands wish to order up. They are great customers and really well known venues on the East Coast. If you are a band, and you have not played those two venues yet, you’re not a very good band!” she laughs.

“I feel like everyone in this company is always trying to surpass their last effort,” Thompson says. “We are very passionate about what we do here and who we do it with. Recognizing that competition is healthy for businesses, we are simply not interested in going after someone else’s work just to improve our bottom line. On the other hand, if you’re not happy with your current touring company, we want your work. We have the best prices, service and equipment. We are here for everybody.”

Iorfida sees their biggest accomplishment in 2019 as being awarded the after-party project for the New England Patriots at their Super Bowl win in Atlanta. “I’m not completely positive I saw Tom Brady pointing directly to me at the party” he says, “but I took it as a sure sign that good things were coming in 2019 and that much has come true.”

Fred Thompson and Derek Iorfida flying to Atlanta for the Super Bowl afterparty.