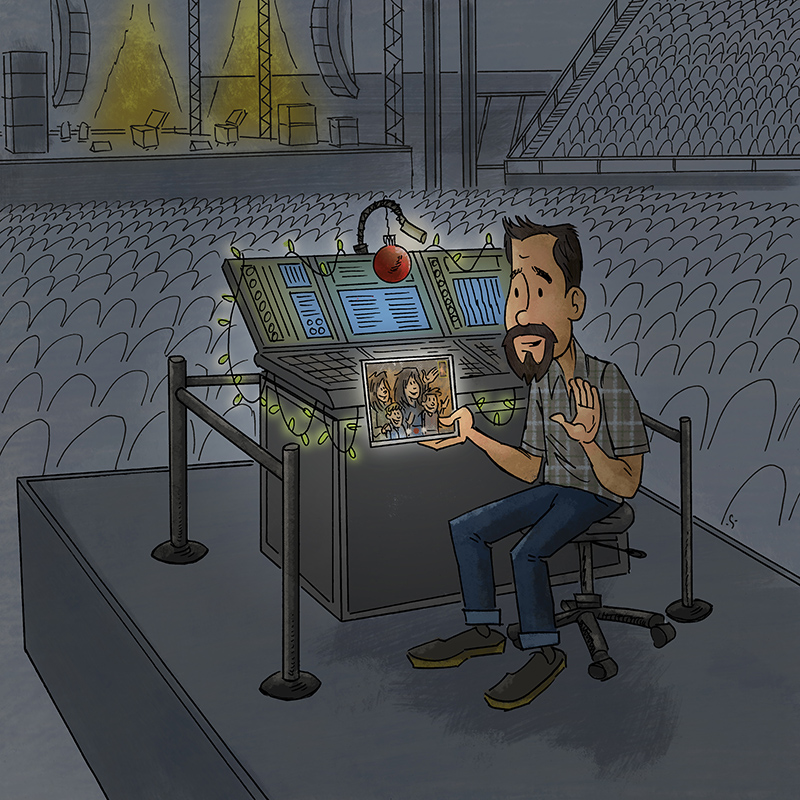 After almost six months away from home, I had just witnessed the first show in a live environment in almost two years. The crowd had just poured into Al Wasl Plaza at Expo 2020 [held in 2021] to experience the premiere of our newest show. They were as entertainment-starved as I have ever seen. The first thought that came to mind when the house lights went down was the prisoner who escaped from Plato’s cave to see the sunlight for the first time. They had come to this auditorium for a reason, but they couldn’t comprehend what they were about to see. Much like myself, the only entertainment these guests had seen in the age of Covid has been on a digital screen in the confinements of their own home. The only radiation of amusement had originated from the mind-numbing glow of the Panasonic in the living room or the convenience of the iPad in the bedroom. The performers had been preparing for this for months. Our cast and crew of hundreds had flown in from all over the world under highly regulated circumstances. They were just as desperate to get on stage as the audience was to view their artistry.

Without spoiling the show, there were puppet masters, dancers, projection, moving stages and perfectly timed lighting. As the show ended, the ensemble reached their arms out for the final bow and the crowd erupted. The cheering sound of an audience and the proud faces of the performers hit me right in the feel-goods. The sensation of a roaring crowd transferring their appreciation to the awaiting performers generated a swelling in my chest. I want to take a moment to discuss just a few of the many sacrifices to make this happen.

I am not so hubristic that I would ever compare what we do to the heroism of soldiers, doctors, or astronauts, but we do sacrifice for our craft. At the peak of the pandemic, I was asked by Woodroffe Bassett Design to leave my family in Canada for several months. My wife Sharon and I had grown accustomed to our pandemic routine. Both Mommy and Daddy were home to drive kids where they needed to go, dinner happened at about the same time every night, and there were two reasonable adults in the house to take care of the needs of Tiger, Lily, and JJ. Most people in our immediate circle cannot even fathom why I would be willing to leave my family for six months to go to a Middle Eastern country to put on a show. Some of the people in my small town probably think I’m a spy or a drug dealer. I would have chosen a much more plausible cover story if I was trying to lead a double life, though. Every time I leave for this long, Sharon’s routine is torn apart. Her sleep schedule is disturbed, her workload doubles and her conversations are limited to Pokémon cards, the newest video games, and Tiger describing in exhaustive detail what he has learned on YouTube. My contact with my entire family is limited to FaceTime at midnight wherever I may be with my constantly changing schedule. Being a parent over FaceTime is hardly being a parent at all. Sure, I send home a paycheck, but that’s the bare minimum of parenting. This sacrifice is shared by every performer, every technician and every creative who has left their family during a pandemic to live in an Arabian hotel for the sole purpose of making strangers clap.

Over the six months, I have missed my kid’s first day of school, my birthday, Sharon’s birthday, several family birthdays, the formation of Sharon’s new business, Thanksgiving, and the day my daughter was chosen to be on the travel hockey team. These are the moments that I will never get back. But for all those sacrifices, I’d like to tell the story about an exceptional man who was willing to risk everything for entertainment. While out with Fleetwood Mac for an extended tour, we had a technician named Thomas on the crew. Talk about dedication: His wife was six months pregnant when the tour started, and two months into the tour, we knew he was cutting it close by still being on the crew. She had a few kicks and bumps that almost persuaded Tom to leave, but he wouldn’t fly home unless he knew she was going into labor. He would often say “You guys are my crew; I won’t leave you.” He is correct, we are his crew, but I think that term meant much more to him than it does to most. We never had to put it to the test, but I think he would have taken on a pack of wolves for us. He was willing to risk missing the birth of his first child for each subsequent load-in. After two and a half months on the road, we finally had to threaten him, banishing him to be there for the baby’s birth. “Go home, or we will send you home,” we warned. We put him on the next flight, and he made it just in time to be with his wife for the most important day in a father’s life. Unsurprisingly, he came back a short time later. This was a sacrifice that he made knowing that he wasn’t saving any lives, protecting any valuables, or discovering uncharted territories. This was a sacrifice that he was willing to make for the sake of art.

As I mentioned earlier, not many of my friends and acquaintances back home understand what I do. They often ask me for help setting up their speakers, their new TV, or advice on new bulbs for the front porch. They must think I’m an AV guy like the ones they see at Best Buy. I’m happy to help, but that’s not my expertise. At a cocktail party, when people ask what I do, I don’t have a ready answer. It would be easier to just say that I’m an accountant, a plumber, or a salesman, because people have an idea of what those professionals do. They have a job, they do it, then they come home. Even complete strangers can place them into an occupational box by their title. We don’t have that option. When we say that we work in entertainment, it’s easy to wonder if we mean the local community theater or an escort service. If I say that I’m a lighting director, I can see the wheels turning, and inevitably the next question will be something like, “No, what do you do to make money?” or “Is that a real job?” Yes, it’s a real job and no, it doesn’t make that much money. It does fulfill my soul though.

This article is written to thank you, the entertainment professional, for your sacrifice. Not just you, but your family, too. Entertainment folk are a unique breed. We work tirelessly to provide entertainment for strangers who may never know our names, never know how far we’ve come, or even know that we exist.