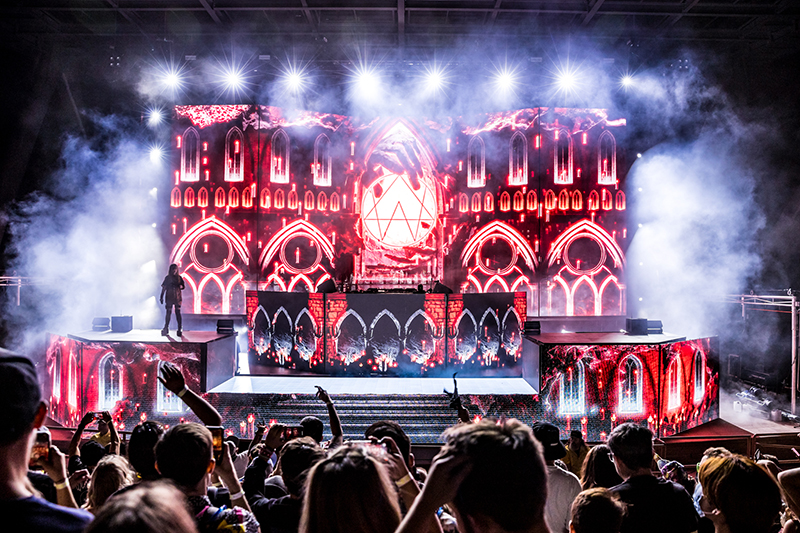 The artist wanted to make a “church like” experience for her fans, but not in a religious way. Photo: ALIVE Coverage

Alison Wonderland (a.k.a. Alexandra Margo Sholler) wanted to take her career to the next level. With new material to debut, the Australian-born, Los Angeles-based artist proceeded to pivot from her role as an acclaimed EDM DJ to that of pop artist. The production of her two sold-out shows at Colorado’s Red Rocks Amphitheatre on Sept. 14-15, which were dubbed the ‘Temple of Wonderland’, reflected her new performance path. Los Angeles-based creative studio Human Person designed the show and video content. Melbourne, Australia-based LD David Fairless designed, programmed and operated the event. Denver-based Brown Note Productions, the main vendor, provided all lighting and video equipment. All Access Staging and Productions supplied the staging and lift. 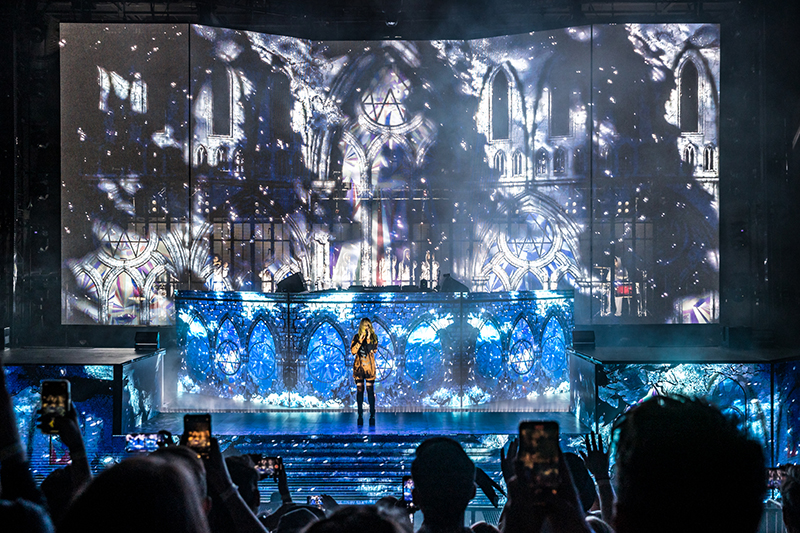 Show designer Ben Dalgleish, who co-founded the Human Person studio with Ian Valentine, began his collaboration with Wonderland in his homeland of New Zealand where, thanks to strict and successful Covid protocols, large concerts returned sooner than in the rest of the world. Red Rocks was already on the schedule, as was the goal of the artist who was pivoting to a larger, more dynamic visual concert. Dalgleish says the first directive was a stage with a large footprint, and he had to consider the high viewing angle of the Red Rocks audience as well. A multi-tiered elevated stage was designed and then built by All Access Staging and Productions.

“She wanted to make an experience for her fans that was almost like a ‘church’ but not in a religious way,” Dalgleish explains. “She wanted physically to have multiple levels like an altar.” The design also had to accommodate a large 16-member all-female band, including drummers and a choir. Finding creative ways to feature all the musicians was another goal, as was keeping track of the artist as she moved to the different levels, sometimes via automatic lift, singing, DJ-ing, and even playing the cello. 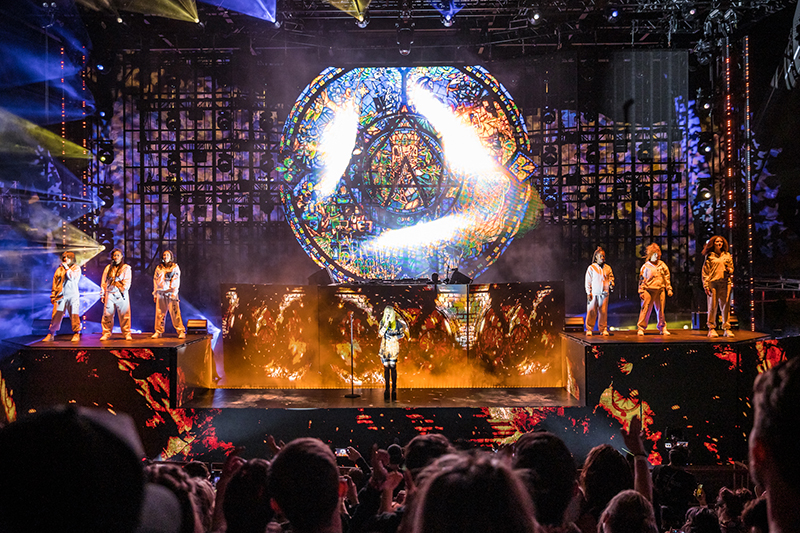 LD David Fairless wanted to play with depth and the transparent screens while still having moments for the lighting elements. Photo: ALIVE Coverage

One of the first elements dialed in was a ROE Vanish V8 transparent LED screen, of which the team made great use. “We wanted an immersive visual environment,” Dalgleish says. “The Vanish seems to be the most high-quality product of its kind that is accessible in terms of quantity and price point. It is the perfect line between being able to see through it, yet have a robust durability. Having another layer of LED behind that screen really allows us to layer the visual elements.”

Human Person created all the visual content. “We started working on that as early as March of this year, doing a range of shots with Alex [Alison] in New Zealand in different environments,” he explains. “Alex wanted all the visuals of her to be as trippy as possible, mind melting with optical illusions.” Director Sam Kristofski shot the video bits using unique lenses and prisms for that imaginative, visual flair that was so effective in the live show. Human Person also supplied the media servers operated by Ryan Sheppard. “Ryan is a great Notch designer and got some amazing creative moments from utilizing cameras mixed with Notch effects.” 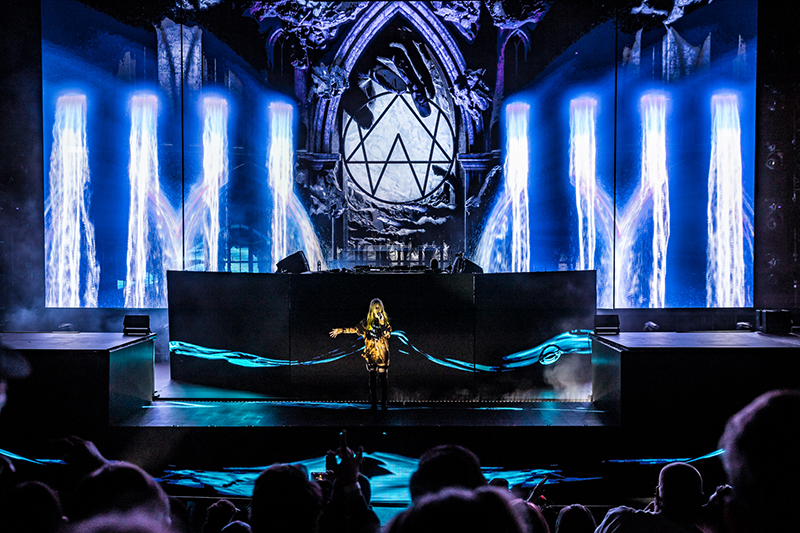 David Fairless has worked with Wonderland for more than eight years, starting with the first inception of the warehouse shows in the artist’s native Australia to multiple tours around the U.S. “We’ve grown together,” he says. “Alison puts a lot of trust in her team. With our history, she trusted me with the show and had not seen one lighting cue until we debuted it at Red Rocks on the first night.”

As this was his first time designing lighting in the picturesque amphitheater, he knew the show had to work both for the front row fan as well as those in the top tier of the natural rock venue.

“Ben created a striking stage design that used the depth of LED screens and staging elements to create an overall image that opened the door for creative content looks as well as a unique lighting design,” he says. “I really wanted to go for something powerful — something that complemented the stage design, but also had a strong identity on its own.” He added in all the tricks he’s learned over the last few years, allowing for a constantly evolving look to the show. 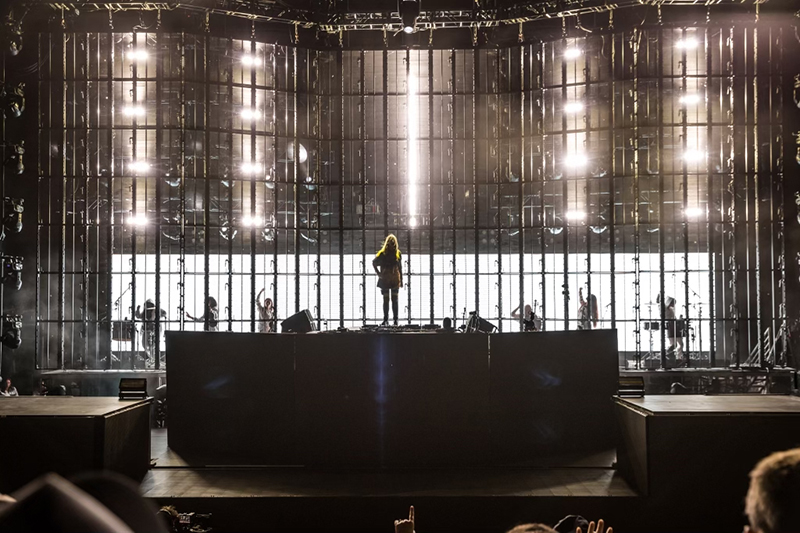 LD David Fairless noted that “Ben [Dalgleish] created a striking stage design that used the depth of LED screens and staging elements to create an overall image that opened the door for creative content looks as well as a unique lighting design.” Photo: ALIVE Coverage.

Understanding that the video elements would dominate, Fairless wanted to play with depth and the transparent screens while still having moments for the lighting elements that dynamically worked with the content. “I looked at the design in two layers, in front/around the transparent video wall and [solid] video wall. The ideal situation is when there is uninterrupted video, while still having an outer layer of lights to push into the crowd. This lent itself to a spot/beam type show where I only had the one hybrid fixture type. Breaking up those sections is what gave me the most dynamic range of effects and looks.”

The hybrid fixture he chose was the Martin MAC Axiom Hybrid, which was “a perfect fit,” he says. “Its capability to quickly change between a profile and beam is what made the fixture so attractive.” GLP impression X4 Bar 20s gave him the strength he needed to push attention grabbing looks into the crowd with both chords of Tyler GT truss lined with the bars. He had three main sections of doubled X4 Bar 20 runs; the middle section also had 14 GLP JDC1 strobes on both sides of the X4 Bar 20s, offering a powerful and pixelated look. “I love GLP fixtures and what they can add to a show. With other lights littered around the space, from hidden Molefays to the new Robe Forte profiles, I was able to use each element singularly but also find them cohesively working together.”

Fairless naturally aims to create as many great moments as a designer can. “The priority is to connect the audience with the music, keeping them engaged, inspired and triggered throughout the show with multiple impressive looks timed perfectly with the music,” he says. “Some highlight moments from the design were when lighting and video content matched so perfectly it seemed as if beams of light were coming through the content onto the crowd.” There might be one personal favorite of his: a stand-alone moment toward the end of the set where there’s a large bass rolling drop, and all video and lighting is stripped back to just the X4 Bar 20’s slowly tilting in green and a tight beam punching through the smoke. “I thought this was one of the most powerful looks of the show, and something that really stuck with me.” 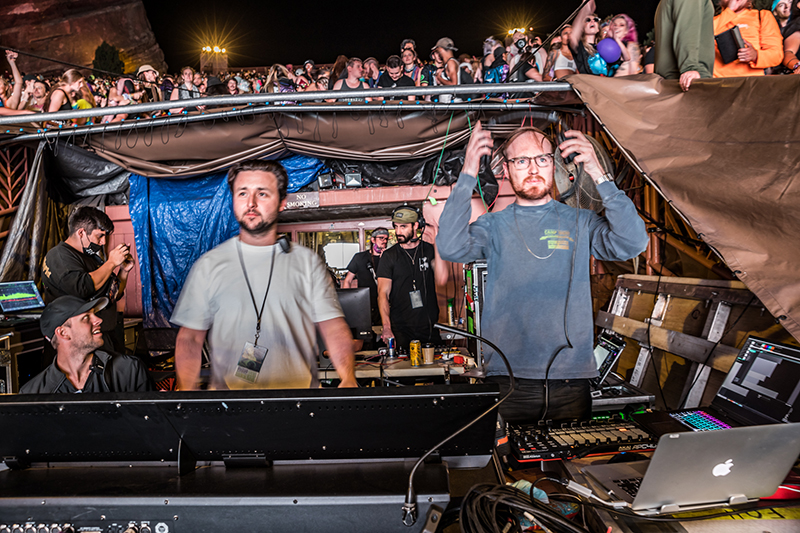 David Fairless (white shirt) at Red Rocks with the rest of the crew at FOH position. Fairless served as LD and also programmer and operator.