Remote Show Productions is Up and Running 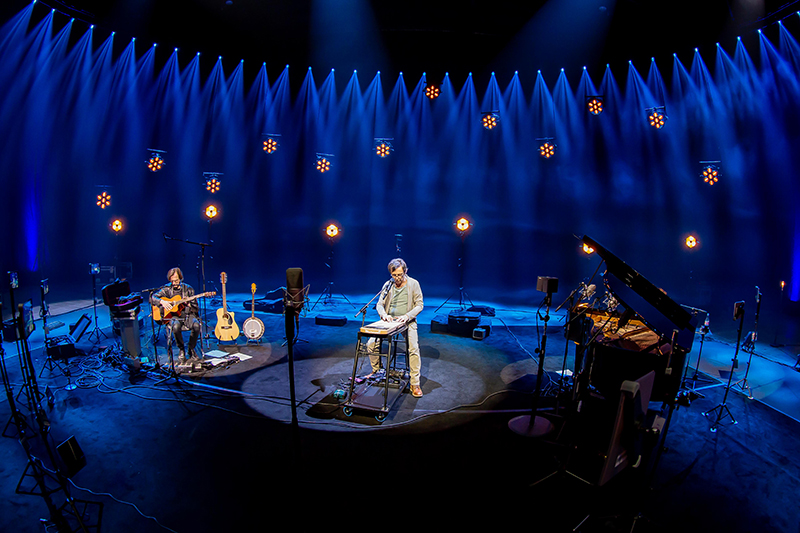 The core idea for Remote Show Productions is to be able to offer the worldwide entertainment and broadcast industry the expertise and services to produce, program, control and mix remotely. All that based on a network of different players from all parts of the industry, as well as a strong technical backbone with network partner Riedel. 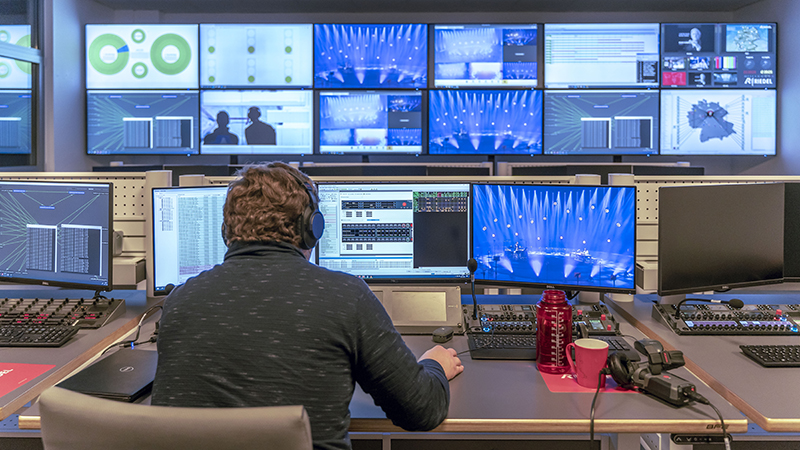 Another idea, which was used for the showcase is to create a more immersive viewing experience for streamed shows and to invite patrons to a live event, without leaving the comfort of their home, office, or wherever they want to watch the show. Viewers can choose whatever seat they would like in the house to view an event. Including from a position between the drummer’s rack toms if they wish. Think of it as a pay-per-view, only way more personal, with your choice of seat. 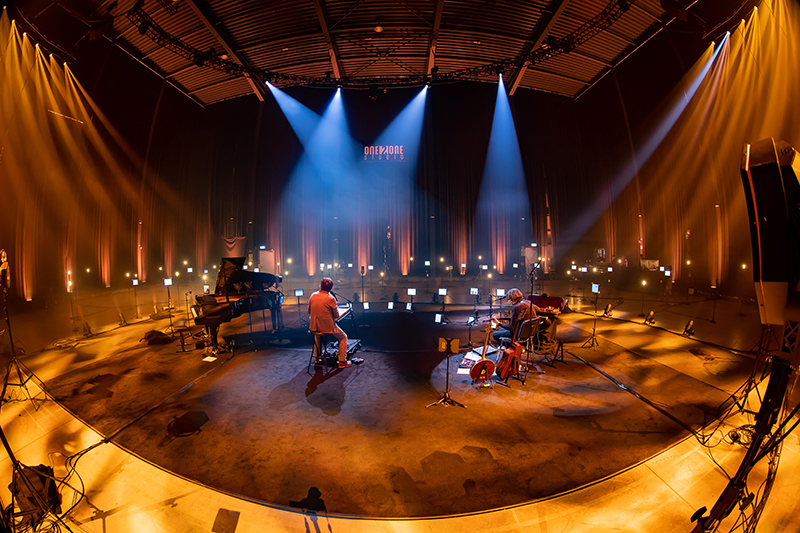 Remote Show Productions pulled off their first two showcase events recently, with back-to-back shows featuring a concert and a spoken-word event. While the shows were well received by the 40 patrons watching from home, the true magic of this new technology is that the lighting designer was in Munich while his console programmer was in Frankfurt. The director worked remotely as well, cutting cameras from Vienna. FOH audio was mixed in Cologne while the immersive 5.1.4 recording was controlled at Valhalla Studios in New York. The performance itself was live streamed from the One2One Studio in Bottrop, Germany. The TV Skyline Skycenter in Mainz, Germany acted as a hub for camera control, image mixing, and stream delivery, while teams in Berlin managed quality control and remote audience aspects. Some friends from Riedel Communications out of Wuppertal, Germany spearheaded the technical side of bringing all the internet connections together. 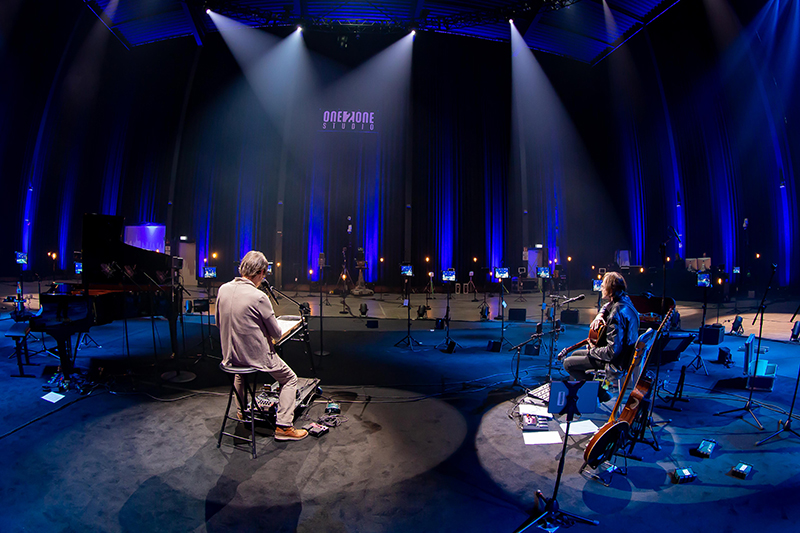 On Nov. 22 the live-streamed program opened with Purple Schulz playing an intimate, center-stage concert. The second evening saw Stephen Ullrich and Daniel Klein thrilling audiences with a performative reading backed with drum sounds. The onsite crew for the event was minimal with only 17 people on site including artists, catering and technicians. A live stream such as this from a studio normally will require 50-80 people. An event in an arena may require 500 employees onsite to serve the 15-25,000 audience members. This show was to serve as a “proof or concept” that the technology is there, and it could be done. 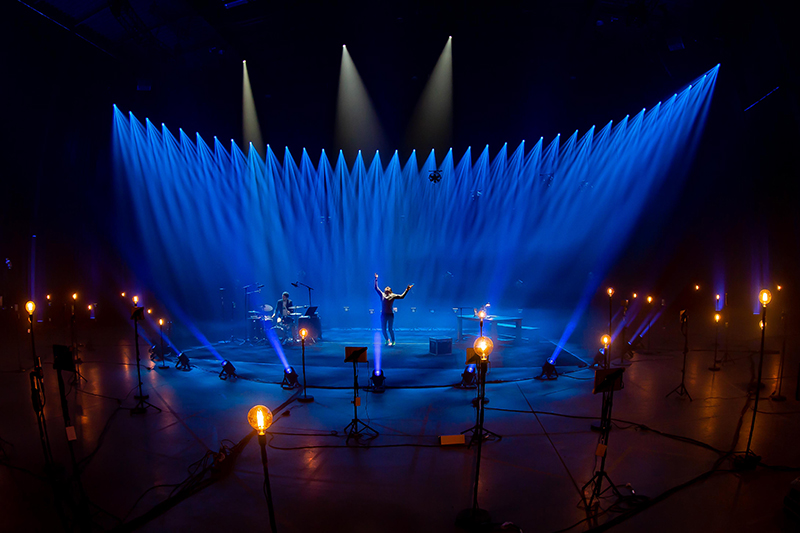 The brainchild behind this idea is Peter Brandt, CEO of the Remote Recording Network (RRN) and has been five years in the making. While he admits that it has taken years to bring his idea to fruition, the pandemic aided in speeding up the delivery of his first two shows as a test run.

A spoken word show was performed on Nov. 23

“The idea has always been to be able to offer viewers a choice to witness a show through any seat in the house. Do you want to be in the front row face to face with the production or would you rather be in the mezzanine level where you can take in the full production? Wherever we place an iPad, that can be your seat for the show.” Imagine watching Elton John performing on his piano while you view him as if you’re sitting on his piano.

“For these shows we placed 40 iPads around the room to simulate the audience. Like a typical Facetime chat, the people on stage can see the 40 audience members live as well and can interact with them live if desired.” Brandt adds. The audience members could also watch the show through the Director’s cut like any normal TV show. The director had five remote cameras on site and a single manned camera for closeups. The audience had to load an app into their device, used the standard Safari browser or alike with their iPad to watch the show, making sure to mute their own mics. The app allowed the viewer to watch the performer through their dedicate place in the audience or switch to the live Director’s cut of the six cameras in use. 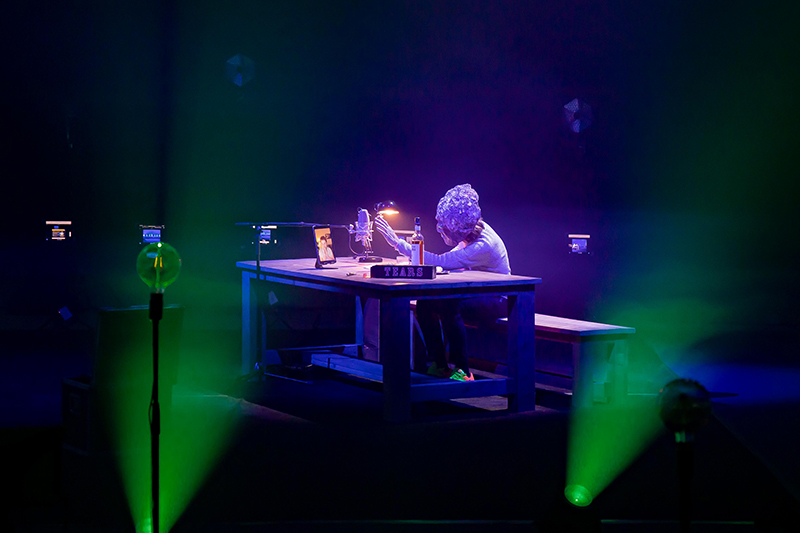 Peter has long been involved in audio and working out of transmission trucks that beam a signal out from an event or record an event for future broadcast. It was his connection with longtime associate Carsten Voßkuehler, who had taken a position with Riedel Communications two years earlier, that enabled this project to happen. The technological heart of the production was the Riedel ROC, the communications and signal control center through which all remote production connections converged. The ROC team managed, programmed, and monitored all intercom signals, data streams, audio feeds, and CCTV feeds from their headquarters in Wuppertal, Germany. 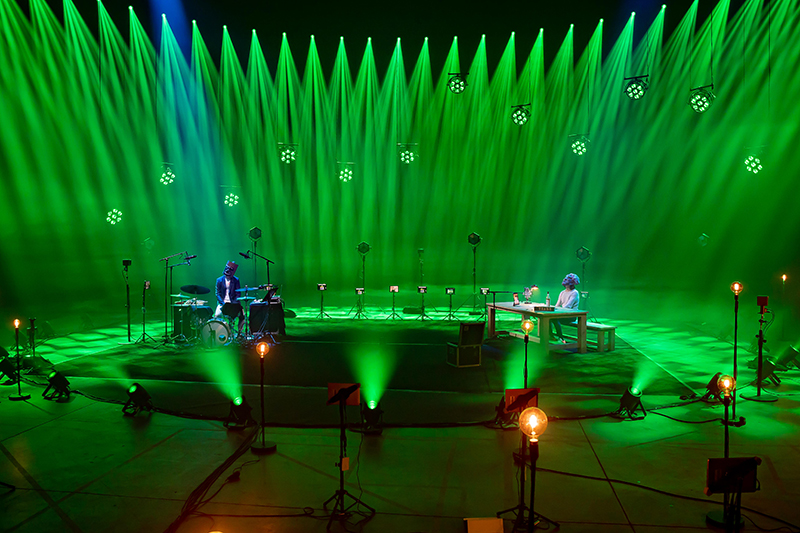 “The talent involved in this show are friends of ours. They knew going into this production that this evening’s performance was not so much about them, but a trial to see if we could pull this technological idea off effectively. And we did.” 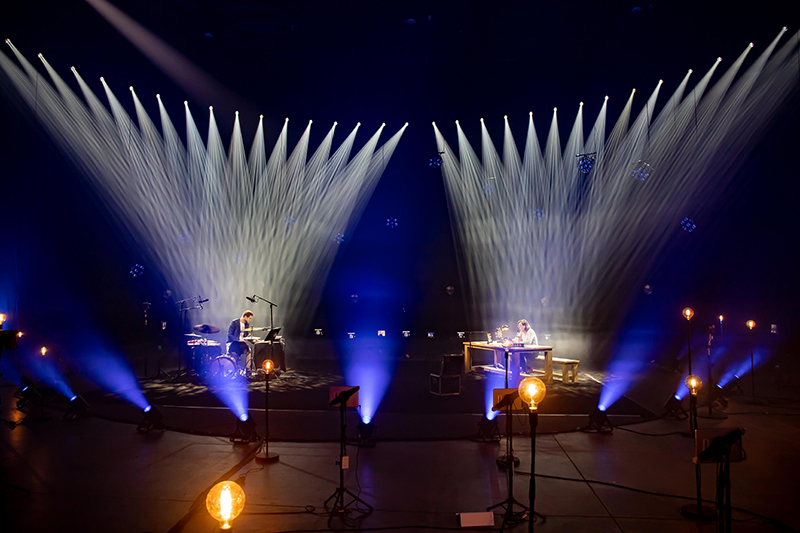 Shooting a Show Without a Large Crew On Site

How it all works may sound complicated to most of us, but that is where Carsten and his team come in. “We are simply using a couple of 4G internet routers and two consumer DSL lines with 10mb upload each on site to connect us all together.” explains Brandt. There is an audio engineer sitting somewhere in Cologne with a Digico console that is networked with the same model that is in the studio. So the console in the studio is sending the feed out to be livestreamed, but being controlled by an engineer in a living room in another country. “Years ago the latency in signal would have made this impossible to pull off, but we have a mere 40 millisecond delay time between the artist hitting a note and the engineer in cyberspace hearing it. Carsten and Riedel, is where the magic really comes in.” 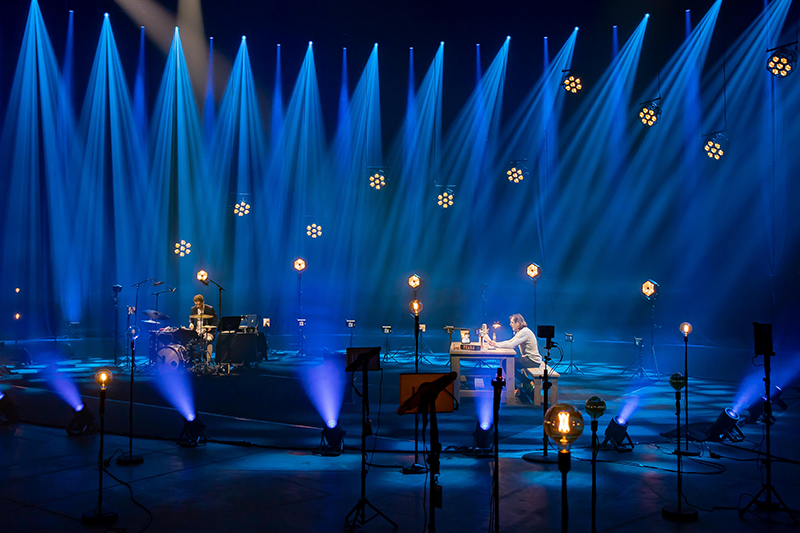 Lighting-wise it was a bit of a different scenario. Designer Roland Greil, who is senior partner together with Florian Wieder in the newly formed LA based production design studio The Black Project admits, “I have never lit a show without being on site. Having to rely on some cameras giving me a feed from different angles to create looks was not simple, but as a team we managed to adopt our workflow and learned a lot. I think a lot of time I had to go with the knowledge that I know what I am looking for and trust my programmer to be able to execute it on the fly.” 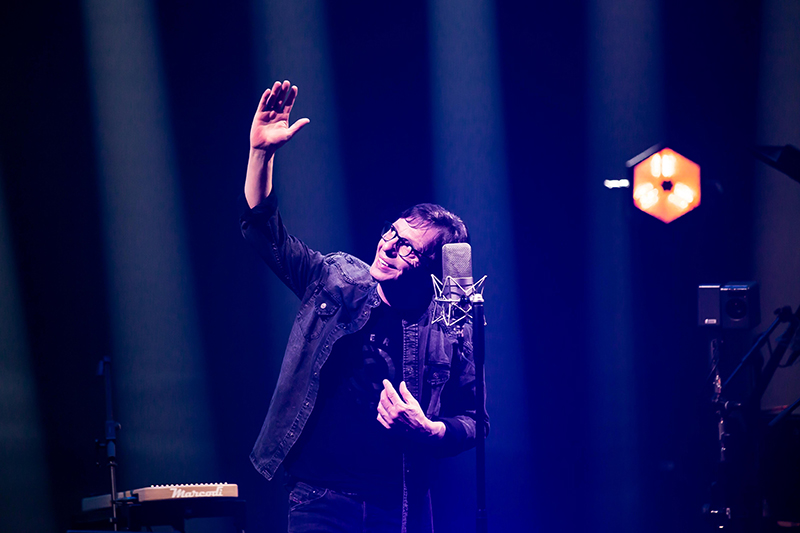 Greil lets us know there was no rehearsal dates nor previz used on this show. Just a few professional people flying by the seat of their pants with a busking page, yet it went off rather easily without a hitch. “The crew loaded in a curved bit of truss with a row of hard edge lights on it. We added typical film lighting fixtures for key and front fills and some Portman units to create an overall intimate Tungsten feeling. To fill the empty space, where normally the audience would be, we put 40 old school filament bulbs on some elegant stands to mimic the feel to have a nicely filled space, which complimented the 40 I-Pads. The whole design was completed with a half circle of small LED Pars on the floor acting as the downstage edge of the performance area and some LED wash lights around the perimeter of the venue to light the curtains. Purposely I designed a simple rig with my associate Michael Kuehbandner (The Black Project). Then my Lighting Director Marc Brunkhardt programmed the cues on a grandma 3 Full size console sitting in his home office in Frankfurt. Marc’s console was actually networked in session with the one on site, similar to how the audio worked.” 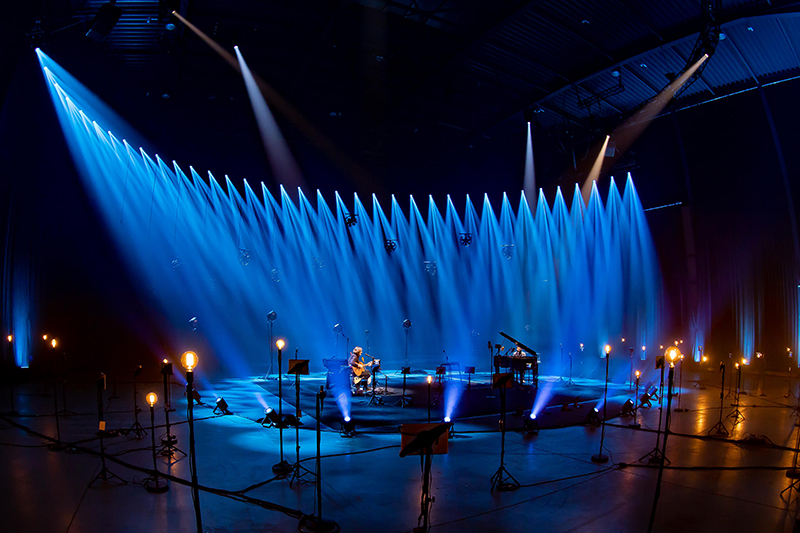 “This is a product that I feel can be utilized long after the pandemic is over.” states Brandt. This production not only demonstrates the ability of the technical disciplines involved to remotely control an entire show, but also provides a blueprint for future applications in a wide variety of genres. This revolutionary form of remote production enables a completely new concert, event, or theater experience, is much more sustainable, saves budgets, and thus creates jobs as well as financial and creative flexibility.” 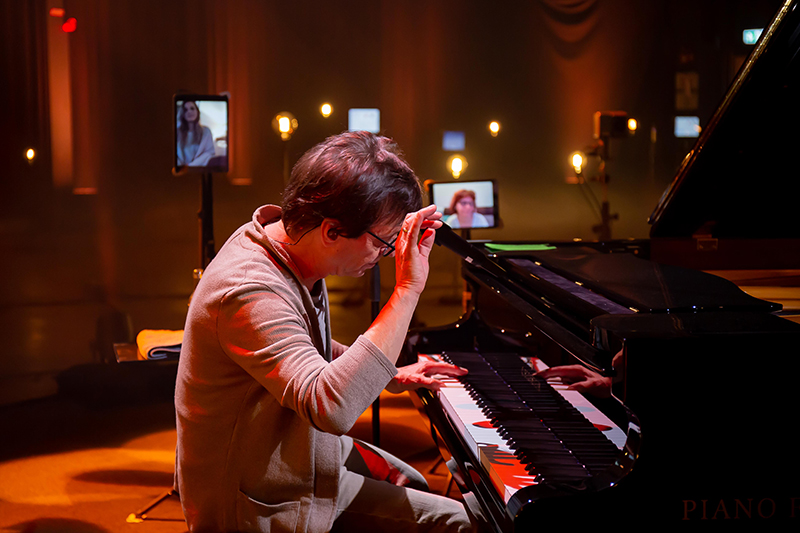 Now that the concept has been proven to work, “We’ve shown Remote Show Productions can do a show from scratch in very little set up time. The team is standing by — we’re all about the people, they are the important part of what we do. The lighting, audio and video gear can be sourced locally. All we need on site is three flight cases for sending the signal out and a reasonable internet connection.” 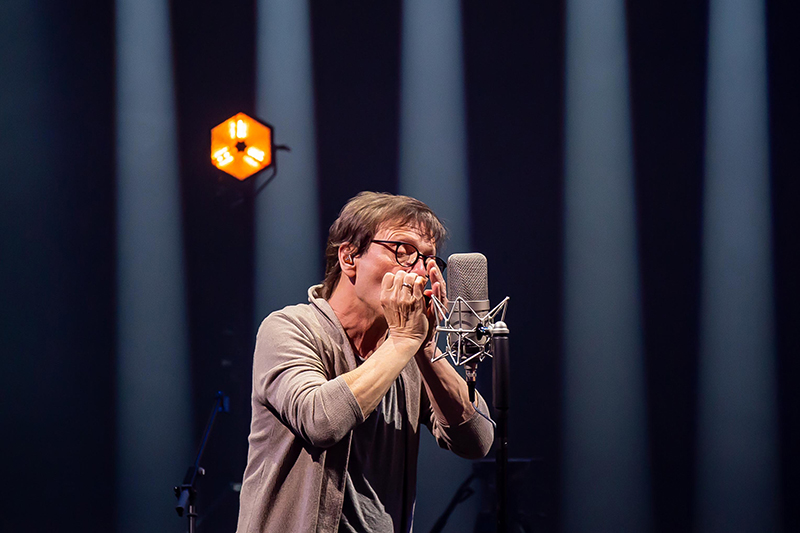 The idea that a viewer can purchase their own personal ticket with a specified seat on stage is new and exciting. A specified prime seat on stage can be viewed from your own coffee table. With the advent of artists selling seats to their sound checks via live at the venue or over the internet, this is taking it to the next level. Imagine a separate industry with one more crew member being added to the tour to strategically place iPads around the stage and venue. I can see it now. 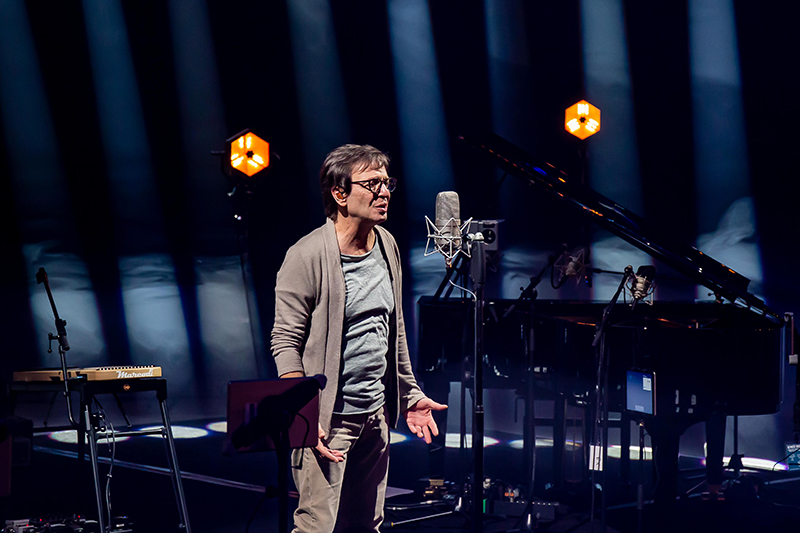 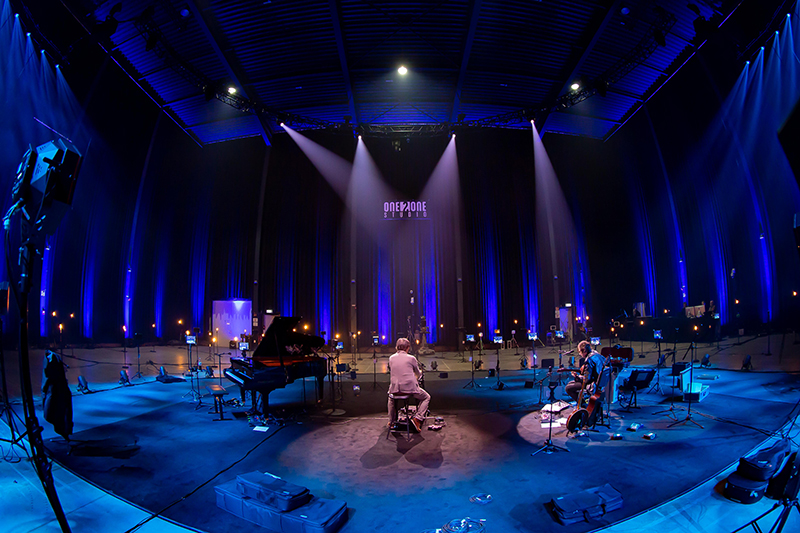 More Details About the Black Project:

A creative production house for live entertainment founded by Florian Wieder and Roland Greil. The Black Project is a creative production house built on two different mindsets and backgrounds. Over two decades of experience within the international touring sector combined with over three decades within the broadcast and special event world, the synergy of both forming a new base for innovative results. Every individual design is based on profound research with the goal of visually articulating the artist’s vision.

Our combined rich and diverse experience allows for a deep exploration of each challenge, in order to push the visual boundaries to the best they can be, while being aware of budget and production restraints. A vision, that is backed by an international team devoid of ego issues, that encourages and practices a collaborative approach. Delivering work, that will allow for easily executed projects based on an efficient design and creation process, while always focusing on the ultimate goal of providing and realizing an outstanding and unique visual concept.