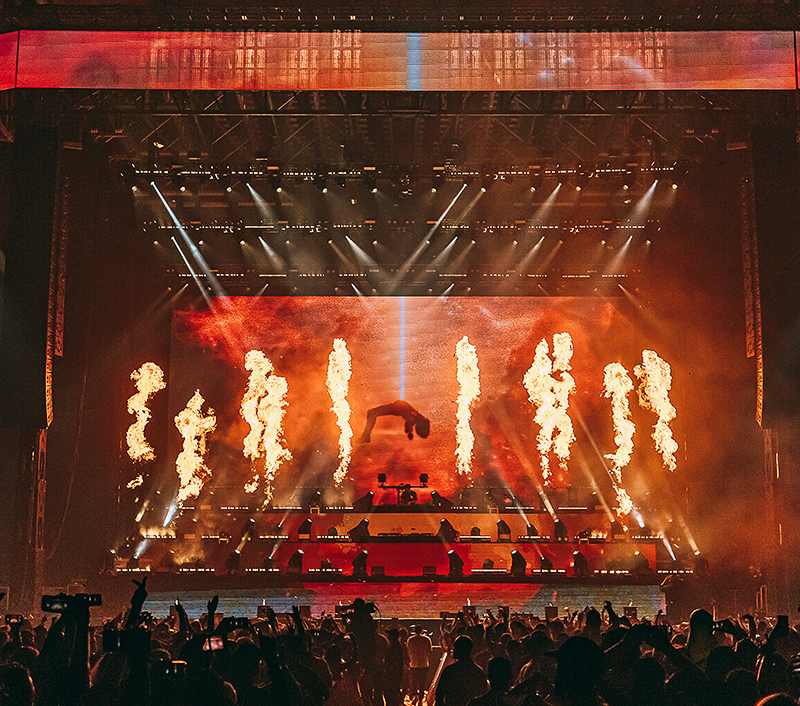 They got the news five weeks before showtime. EDM artist Illenium would be the first ever music event — on July 3, 2021 — in the new 65,000-seat Allegiant Stadium. The $1.9 billion home of the NFL Raiders and UNLV football opened during the pandemic for the Raiders’ first season without an audience. Originally, Garth Brooks was scheduled as the grand opening event in August 2020 but was rescheduled twice and would now play a week after Illenium.

Production designer/lighting designer Chuck Williams has been with the musician, DJ and record producer Nicholas D. Miller — a.k.a. Illenium — since 2015. It’s a long way from lighting the artist’s first headlining show at Denver’s Bluebird Theater.

A mixture of Robe fixtures supply the beams

Getting the Allegiant gig “was such a shock,” the LD says. “It was roughly 16 months since we had played our last show together, and then suddenly we had a football stadium ahead of us. It was exciting. This was a huge moment, not only for Nick, but for dance music as a whole. The team was obviously blown away by the news, but we knew we had a lot of work ahead.”

Enter Denver-based Brown Note Productions. President Ryan Knutson agreed that this honor was a quick turnaround. “Our timeline to produce this show was less than five weeks from the announcement to the show. We just had to put a little hustle into this one to make this happen for the client.”

While many companies locked the doors during the Covid lockdown, Brown Note Productions has kept busy in the social distancing event space with drive in concerts, movies, graduations, corporate meetings, virtual streaming and content creation for virtual releases as well as systems integration.

“They have been our production vendor for a few years now,” Williams notes. “They are always a pleasure to work with, and the crew is always top notch. The crews are all like family at this point — it’s always special doing shows with people you truly care about.” 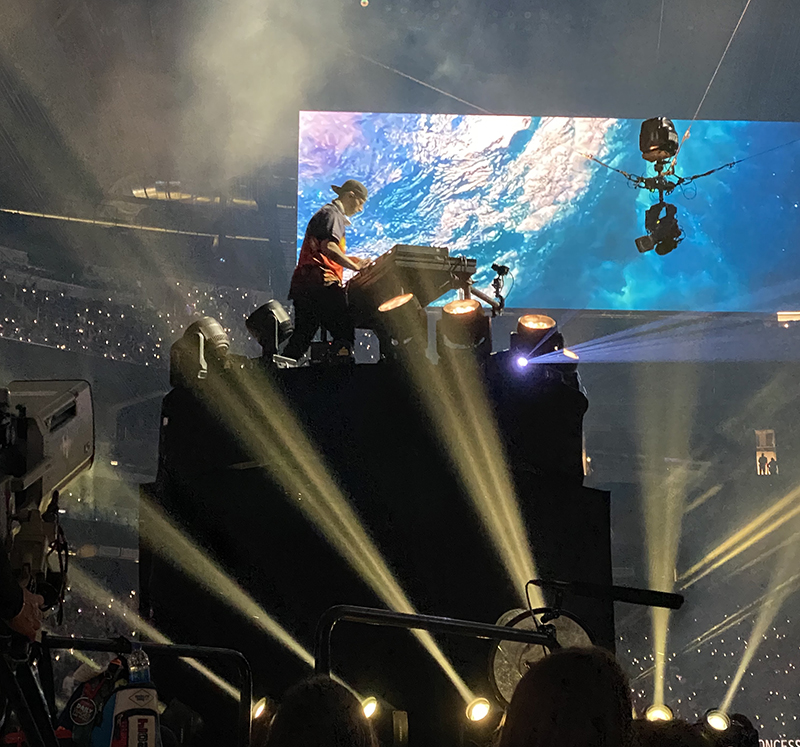 The artist appears in the center of the field

For the Allegiant Stadium show — set at half capacity for Covid precautions — Illenium was playing his entire discography of his first three full album sets plus a teaser for his new album release, Fallen Embers. He wanted different designs for each set.

The LD describes the concept: “For our first album set Nick performed ‘Ashes.’ Originally, Nick’s manager, Ha Hau, wanted to have Nick descend down from the roof of the stadium and perform flown above center field. But this ended up not being possible due to the overhead grid in the stadium. 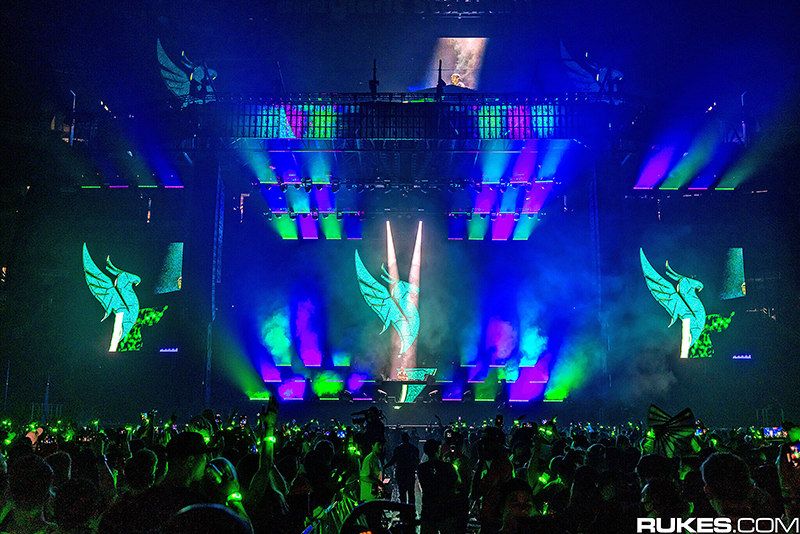 “We wanted to have an intimate vibe for this first set, almost like EDM’s version of a VH1 unplugged vibe,” Williams continues. “I talked to my friend Chris Bier at Gallagher Staging, and we came up with the idea to have Nick play on a rising turntable stage, placed at FOH behind our tech world. The final design used a 10-foot turntable that could raise from zero to16 feet into the air, then rotate from 0 to 360 and back to 0. I placed a 20-foot circle truss four feet off the ground that framed the turntable, which hosted 24 Claypaky Sharpy Beams. On the turntable itself, we had 12 Elation Rayzor 760s and eight crowd scanning lasers. We packed the lift with as much gear as our weight limits would allow.” 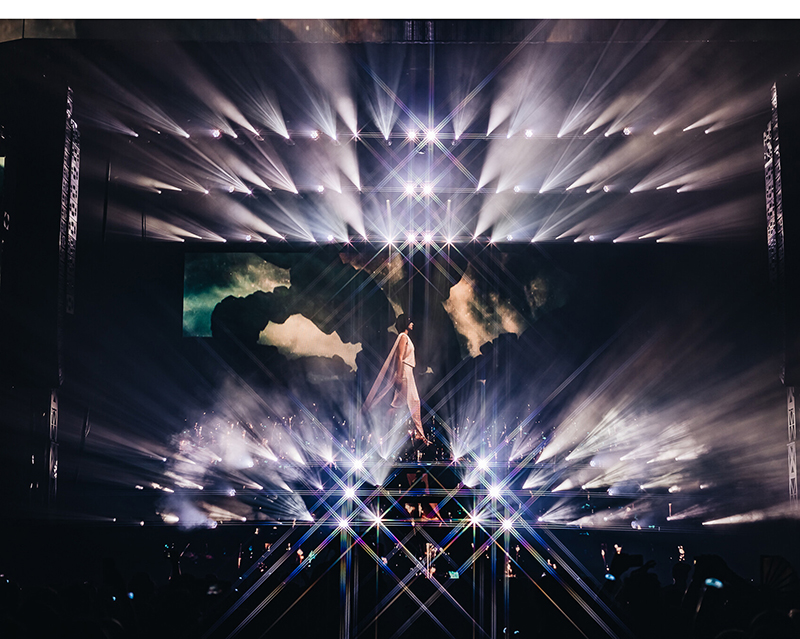 “A Festival Rig of Goodies”

Using a menu of fixtures from GLP, Elation, Robe and Claypaky, the LD further describes his rig. “This stage is basically an ideal festival rig full of goodies,” Williams describes. “The 40 GLP JDC1 Strobes and 62 impression X4 Bar 20’s were my primary pixel chasing units. I used 34 of the Elation Proteus Rayzor 760s as my main wash fixtures, and Robe BMFL Spots and BMFL Blades as my big guns for gobos.”

Detailing his equipment choices, he explains, he calls the JDC1 “an obvious choice — it’s just stunning. I love the pixel chasing capabilities, and the brightness is next-level. I always request it when we have the option. This was our first time using the X4 Bar 20 for our show, and I absolutely loved them. They’re bright, fast, and have a nice tight beam or wide wash. The versatility goes a long way when programming for a five-hour show.” 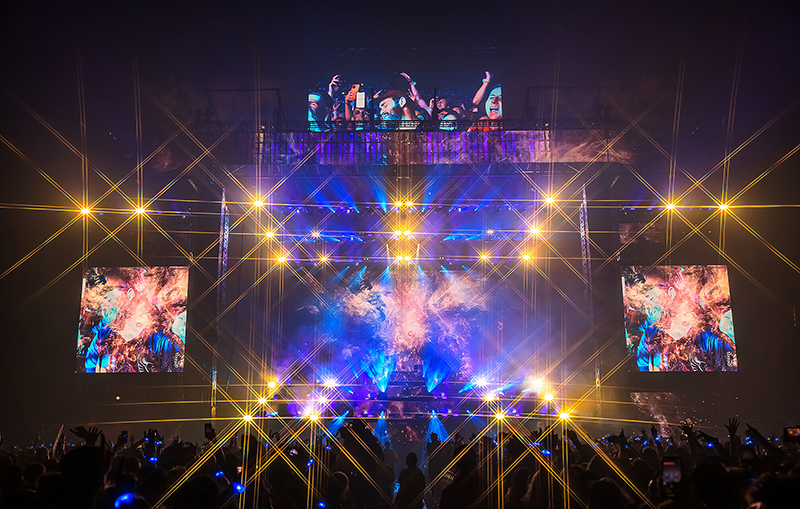 This was also his first time using the Elation Proteus Rayzor 760, an IP65 LED moving wash light. “It’s a great fixture with some cool features. Pixel control was important for me as well as the new Sparkle feature it has. It features a set of warm white LEDs that twinkle around with different internal macros and it makes for some great moments.”

Williams deployed 38 Robe BMFL Spots and 36 BMFL Blades as the main big fixtures, along with 34 Robin MegaPointes. “I requested these because they are very bright and full of tricks. I don’t get to use them often, so it was really amazing to have so many units on this show.”

He also chose 46 Elation DTW Blinder 350 IP. “I’ve always been a huge fan of the 2-lite blinder. I always try to get them placed throughout the whole rig. I love the looks we get during certain moments that are just the 2-lites chasing softly. It fits our shows really well,” the LD explains.

His console of choice is the grandMA. He’s been using the grandMA2 for about five years now, starting with his first show with Illenium. “I can’t imagine using anything else. I’ve been running MA3 mode 2 for our last tour and our one offs. The hardware is amazing and I’m looking forward to diving into MA3 software soon.”

As expected in an EDM show, the lighting was busked live. “I have a handful of cue stacks for certain moments, but it’s mostly a live set. Video, lasers and pyro were cued live as well,” the LD notes. “We definitely have certain looks for various parts of the sets, but all departments had room for creative flow.”

Illenium’s video director, Sandy Meidinger, handles the video content playback and storyboarding for visuals. “Nick has a handful of content creators that build animations and Sandy works closely with them to design/fine tune the final videos. It plays such a large part of our show, it’s amazing the stuff they come up with,” Williams notes. Comparing this show to past performances he adds, “This was certainly unlike anything we’ve ever done. Initially there were a few issues with weight restrictions for both the main stage and the lift on our first set of concept drawings. But, we made some adjustments and the rig actually got bigger so there weren’t many complaints on our end. Overall this was by far the Illenium team’s most important show, and certainly the biggest stage I have designed so far.” 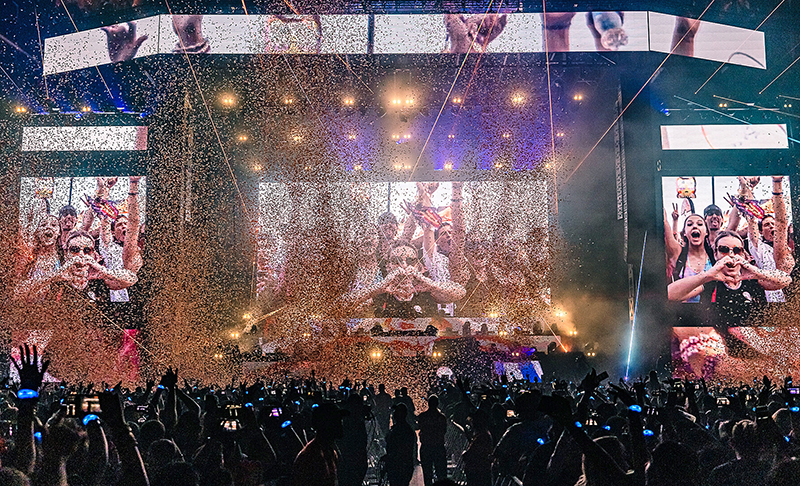 Special Effects, or “WTF Am I Seeing?”

Pyrotecnico provided the CO2, confetti, lasers, flames and pyro for “an amazing night” at Allegiant, says Rocco Vitale, VP of Live Events. Because Allegiant Stadium has a dome roof, Vitale says they needed to scale the pyrotechnics and flames accordingly to meet the indoor venue requirements.

Will Kent, principle designer and laser programmer of Chicago-based Coherent Designs, not only created the look of the lasers but also triggered the cues throughout the show. He’s worked with Illenium before, but this show meant something more.

“I cut my chops on big productions while living in Vegas for three years working for Cirque du Soleil, so Vegas has a special place in my heart,” he explains. “To be a part of Vegas’ first big show back at the brand new stadium seeing its first event, as well as the momentous occasion for my artist’s career, I wanted to go big and leave my version of a mark on the city.”

How did he make his mark? “We added a metric crap load of lasers,” he confirms. “The typical Illenium show is about 10 lasers; for this we went with 67. I was given a lot of freedom to find the rig I felt would look massive in this room and I think it paid off. We didn’t just include lasers on the stage but at the FOH and on the audio delay trusses as well.” 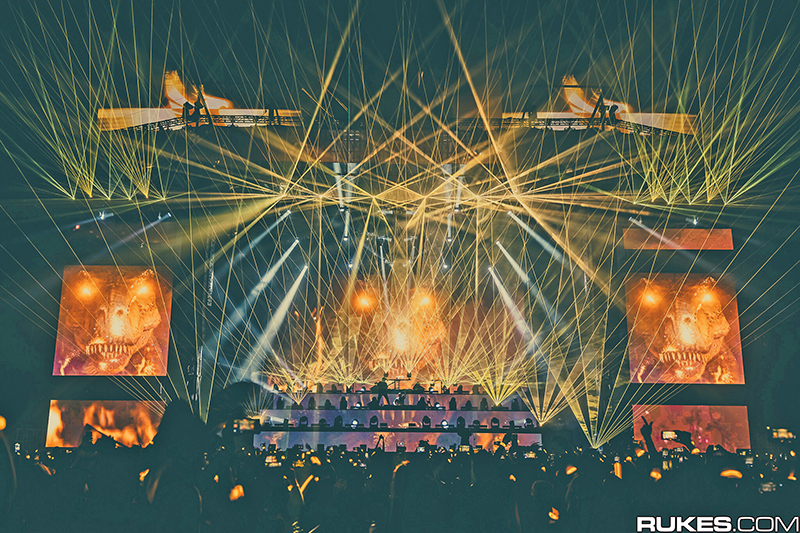 Lasers were deployed extensively in the show. “Nick and Sandy aren’t fearful of using them a lot and it challenges me to make it not the same repetitive cues over and over.”

He adds, “The whole visual show is a collaboration between Chuck [Williams], Sandy [Meidinger], Nick [Williams, a.k.a. Illenium], tour manager Peter Witting and Will [Kent]. “We discuss when different elements should be in the driver seat, who’s in the back seat or even who’s not in the car at all for a particular track,” the laser specialist notes. “Giving each fixture room to shine when right is the key to a great looking show and not EDM soup.”

In preparation, the laser designer hunkers down in his studio with four Kvant Clubmax projectors to view cues and an L8 Previz to see the whole rig. He also dons an Oculus VR headset to view the show in a virtual reality environment to get a feel for the space and work on safe audience scanning cues.

Kent considers lasers as another tool or extension of the show, adding an otherwise unachievable element. “I like to use them as the music dictates as I find lasers can be much more dynamic than the flash and trash beam shows. I use them to excite and startle the audience while also finding more emotional slow moments and ‘WTF am I seeing?’ moments.” 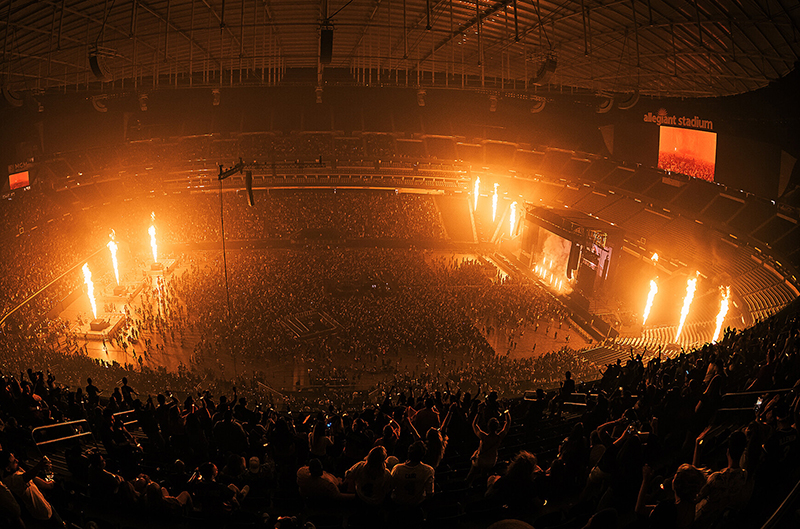 The roof limited the height of the propane flame bursts

Chuck Williams speaks for everyone on the team, saying, “We were all just so happy to be working again. Obviously this past year was tough for so many people. There was uncertainty of whether or not we would get do our crafts ever again. The feeling you get seeing so many happy people enjoying a moment that you’re creating is something special. I’m incredibly thankful to be able to do something I love, and thankful for the team around me.”

He adds, “Even with an insanely tight timeline, the whole team was really pleased with how the show turned out.” 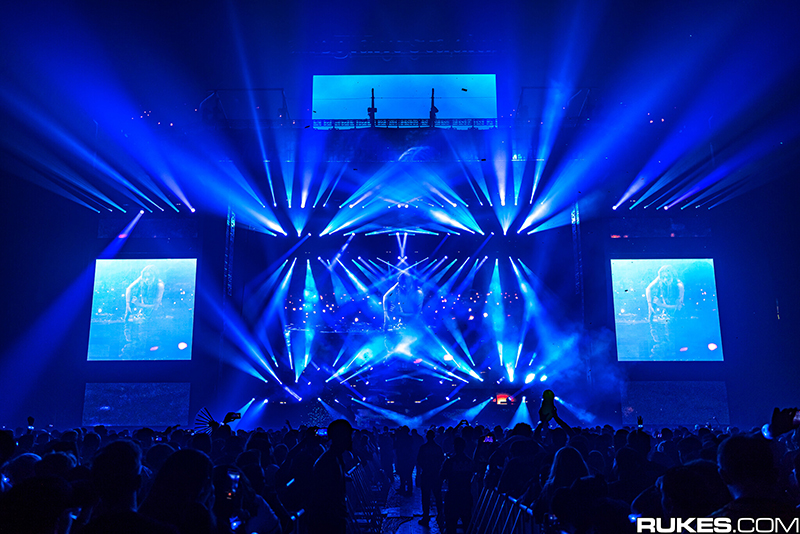 For a crew and gear list, go to plsn.me/Illenium-Crew.