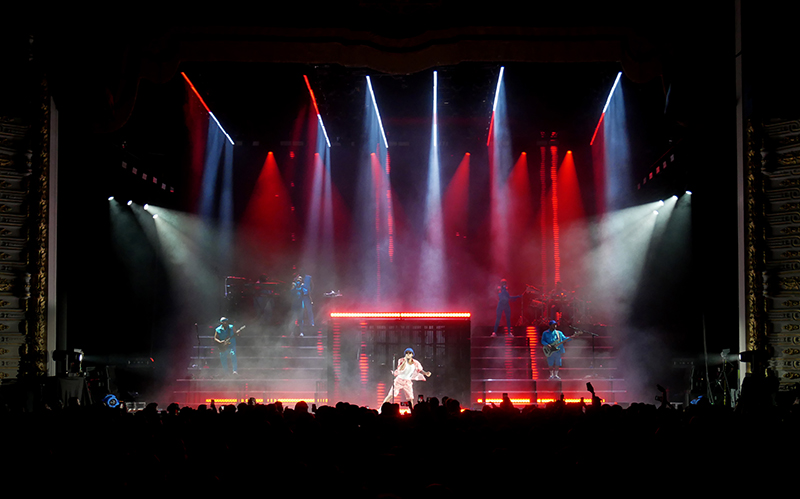 The success of the run of sold-out shows this summer by Anderson .Paak and the Free Nationals can be credited to the artist’s talents, ocean visions, and a fruitful collaboration between Brown Note Productions and LD Seth Bernstein. Jimi Hendrix prophesied, “You’ll never hear surf music again,” but .Paak, a.k.a. A.P., has turned that phrase on its ear. 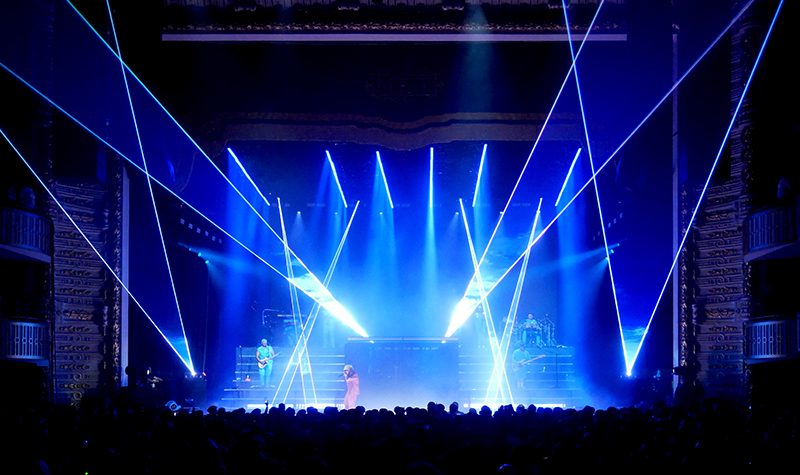 Brown Note first came into contact professionally with A.P. in Jan. 2017, while supporting a co-headline show at Icelantic’s Winter on the Rocks at Red Rocks Amphitheatre. This was followed immediately by an appearance at the Winter X Games in Aspen, CO. Brown Note provided the audio, lighting, and video for both shows and a solid road crew. The performers and crew were mutually impressed with one another enough to re-establish relations when A.P. went on tour this summer.

Production manager Ryan Resch had worked previously with Brown Note Productions on DJ/producer Illenium’s runs during that artist’s tour in 2018. After that run, Resch reached out to the Brown Note team for A.P.’s new project, starting with “Andy’s Beach Club World Tour,” which came through the U.S. last February, backing the release of A.P.’s third studio album, Oxnard, which had been released in Nov. 2018.

“We have since continued our relationship with the tour, picking up again for their Coachella performances,” says Sara Knutson, account rep from Brown Note. Most recently, and on the heels of yet another album release (Ventura, released in April 2019) Brown Note provided the lighting and video package along with touring crew for the “Best Teef in the Game” tour during the summer of 2019, with a fitting full-circle stop in their backyard venue, Red Rocks Amphitheatre. 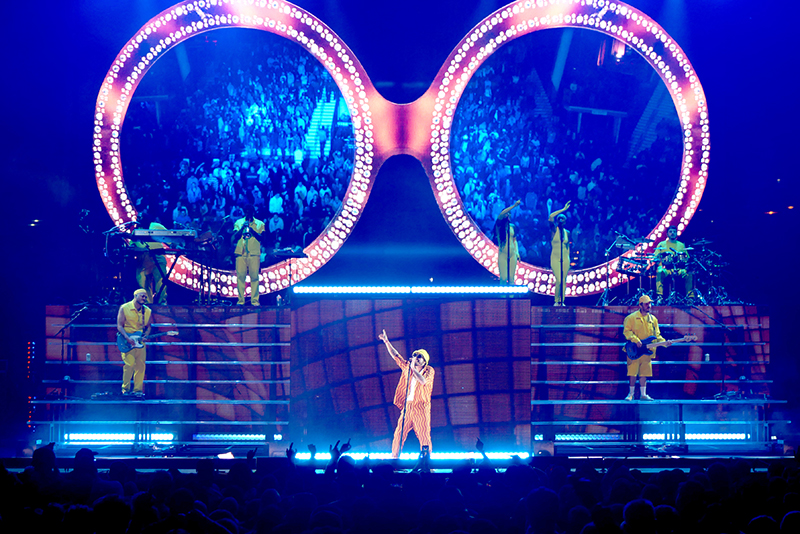 ROE Visual LED screens were used for the shows

LD Seth Bernstein explains how he came to work with A.P. and the Brown Note team. “I’ve been lucky to have a really mixed background by starting in theater very young, then transitioning to fashion and gaffer work upon moving to New York,” says Bernstein. “This eventually led to a four-year stint as the SNL (Saturday Night Live) film unit lighting designer, where he became familiar with A.P. when the artist played a date on the broadcast. “He literally left the entire building vibrating with his energy and blew away the crew.” No small feat, considering all the talent that has graced the stages of SNL over the years.

Two years ago, Bernstein designed a fashion-related project with Willo Perron of WP&A, the creative team behind A.P.’s upcoming tour and numerous past television appearances. Dani Edgren, creative producer with WP&A, reached out to Bernstein “super-last
minute, and asked if I was available to work with WP&A creative director Brian Roettinger on a tour design that started rehearsals in nine days,” the LD notes. 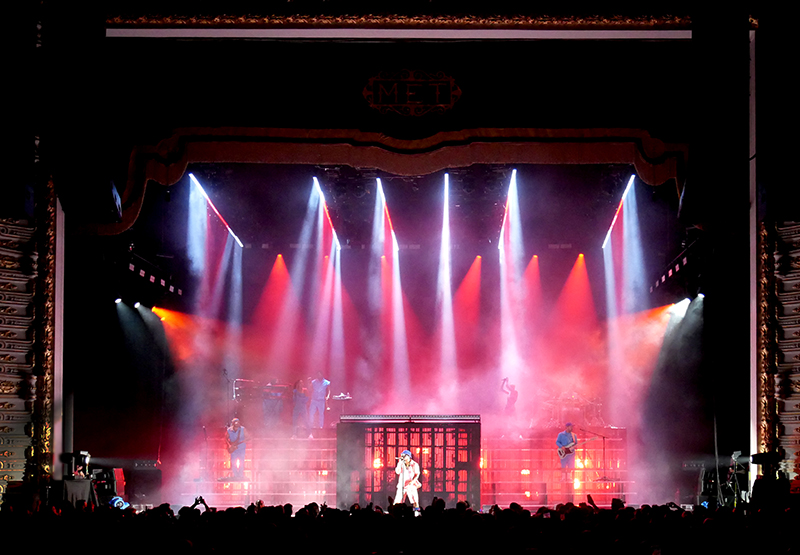 The design process was defined by A.P.’s experience at Coachella earlier this year; elements of the set that were introduced there, served as the starting point for Bernstein’s design. Structurally, Bernstein placed finger trusses mid-stage running up to down stage to accent the center riser, one of the main set elements. Roettinger, an accomplished graphic designer as well as creative director, refined that concept to accentuate minimalist perpendicular lines by adding GLP Impression X4 Bar 20’s on the bottom chord of each finger truss.

To address concerns that the blow-through video wall was under-utilized, Bernstein suggested adding a few simple smoke machines behind the riser — a win-win that enhanced both the looks on stage and the tour’s bottom line. “The change totally paid off, and it became a huge element of the show,” says the LD.

Bernstein also noticed from the Coachella video what appeared to be “a very disorienting factor between the top and bottom video images. There was no ‘architectural element’ to differentiate the U.S. video wall from the video on the platform, and A.P. was just
getting lost in all the intersecting content, with no depth marker.” To address that concern, Roettinger added rows of Chroma-Q Color Force II fixtures to the top and the bottom of the risers. This also added to the elemental feel of the show by creating an underwater effect, reinforcing the artist’s references to surf music.

Another go-to fixture for Bernstein is Robe’s BMFL Blade. “I really like BMFLs,” he says. “The quality of the light makes it excellent as a key. Combined with their brightness, color and speed, the fixture can do everything. We also went with Robe Pointes overhead instead of their MegaPointe product, giving us a straight white PAR look,” he adds.

For control, Bernstein used a grandMA2 full console, which was triggered by timecode to run the show. “I was very aware that it was a huge risk to timecode A.P. Like I said, he’s a super dynamic artist, and everything about the act is constantly shifting and improving. For that reason, the design team separated what elements would receive timecode and what would be left for manual button operation.”

“I can’t say enough good about my experience with Brown Note,” concludes Bernstein. “Right away, I was blown away by the ability and attitude of the road crew. Nick and his team got my intentions right away and worked their butts off to achieve and adapt our vision along with Eric Morriss, the tour lighting director.” 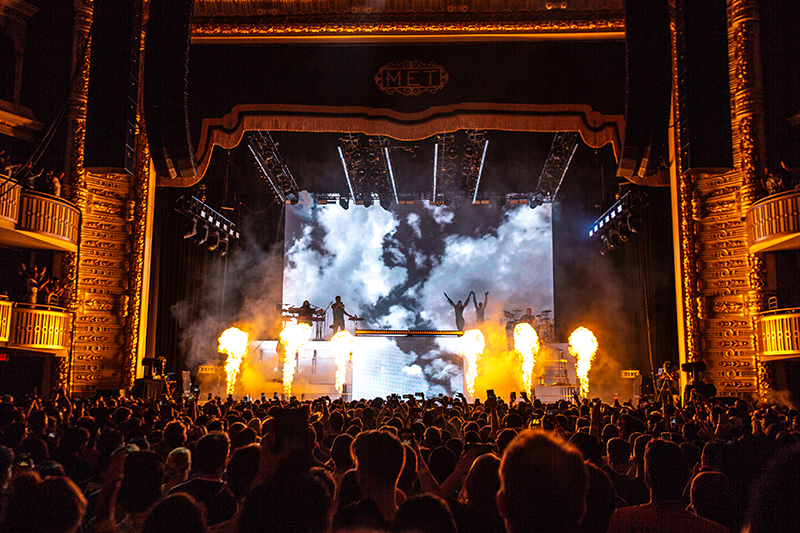 Pyro lights up the room 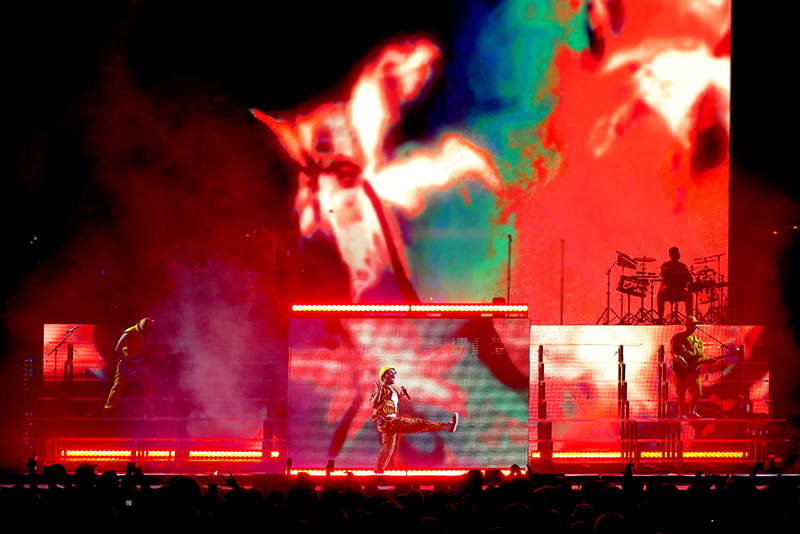 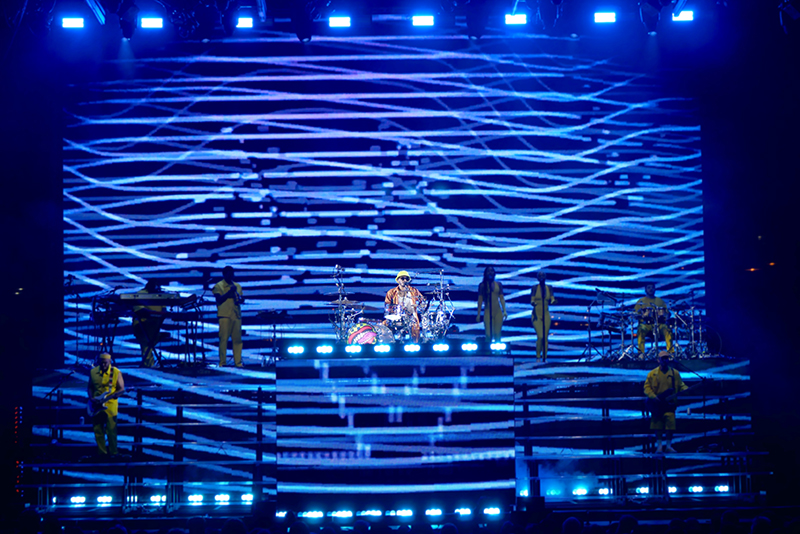 The band becomes immersed in the video