Lil Baby and The Cube 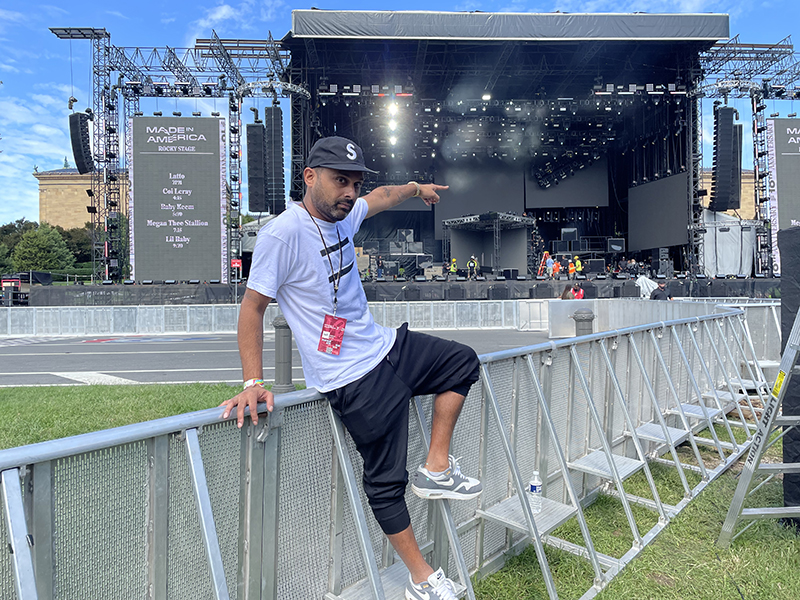 Amish Dani, a.k.a. Ameesh Capeesh, is the executive producer and owner of FRAMEWORX, a creative Los Angeles-based production company firmly in the world of live and broadcast performances. Dani sees his role as the “next generation” of specialists who produce and manage creative production for live events. Responsibilities run the gamut of departments, including lighting, screen content, and production design, which then involves him in a deeper immersion through the phases of development, pre-production, programming, and execution.

“The FRAMEWORX team produces and oversees creative up to and sometimes vertically through on-site and road execution,” Dani says. “The latter is to ensure that the ‘integrity of the creative’ is upheld and provide streamlined efficiency for the client through the phases. We are also flexible and versatile enough to provide à la carte elements as well. On this one, we produced the design, the screens content, and the lighting video and Notch programming. My brother, Tone Lopez, and his team at Hans Tolo managed the rest and executed the shows.”

The core creative team at FRAMEWORX assembled by Amish consists of various directors and designers. “Our process is collaborative,” he says. “When working on the creative treatment, the team spent countless hours fleshing out details for the design and visual story. I worked with our art director Samantha Ashcraft, production designer Ivan Ceron, drafter and large structure specialist Ben Van Brande, and lighting designer Davey Martinez to get everything dialed in, in steps. This is the visionary backbone that collaborated with choreographer Charm La’Donna and Lil Baby and his creative consultants for the artists current tour. 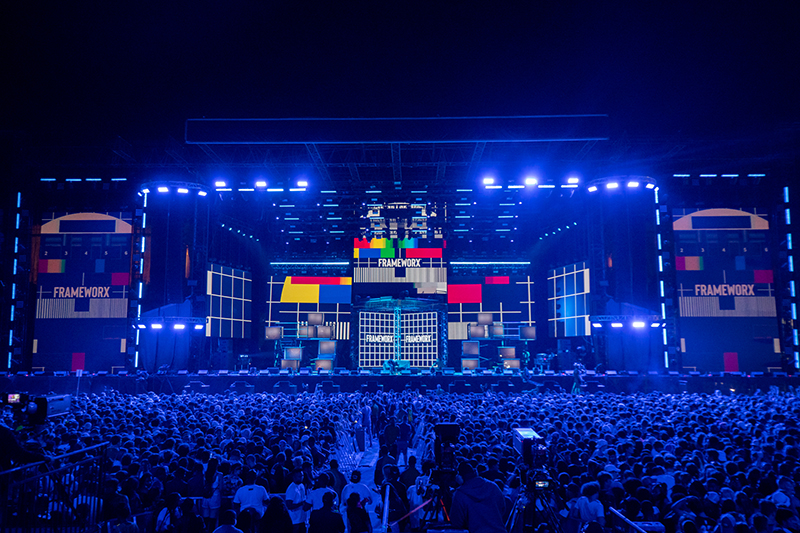 FRAMEWORX and Gallagher set the stage. Photo by Amish Dani

The Lil Baby tour is interspersed with multiple headline performances at festivals. “We were tasked to produce this one-size-fits all creative,” says Amish. With venues ranging from amphitheaters to arenas and onto the immense stages festivals are known for, the task was challenging, in that the production had to be scalable without compromising the integrity of the show; a process that was road-proven by the nature of the Lil Baby’s itinerary.

“His creative consultants had no specific live production experience, but articulated their ideas well and were particularly attached to the concept of a cube shape,” notes Amish. “The cube itself has played into designs over and over; our task was to think outside of that box,” he says, with a laugh. “Lil Baby is at the point of his career where he wanted to make a statement and ‘up’ his production, and for us, we wanted to create something that looked like nothing else in the hip hop world. We were also giving people their first show in a year, maybe two, so it stuck with us that this show needed to be special.” 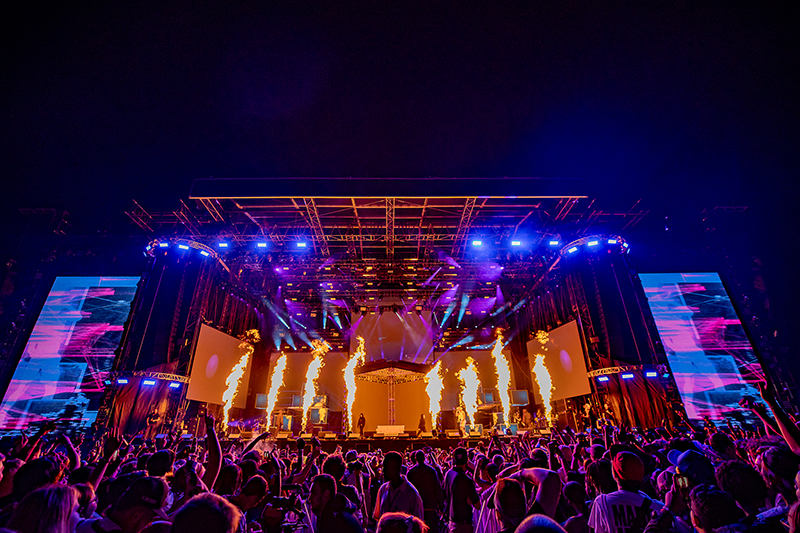 “When it came to additional production for the tour, we included a flown lighting package and video wall,” Amish adds. “The flown lighting package included BMFL Blades, Mythos2, and some standard blinders and pars. Outside of giving us coverage, our approach aimed to complement what we had going on the ground as well as being versatile enough for us to isolate fixtures to create special moments. With video, we added a sizable back wall to complete and mimic the visual content look that we had created for the festivals.

“For screens content, we did not want to just extend into the cube from the back LED walls, we wanted to create a dynamic between the screens,” Amish continues. “For instance, at one point, the cube turns into stained glass and is set against a garden backdrop with angel statues. Another moment showed the cube filling with water as it rises from an ocean. We played off the 3D nature of the cube itself and also had it serve as a performance platform. When he’s on top, it puts him dead center of the festival stage and looks huge.”

The cube during its “stained glass” moment. Photo: Amish Dani

The cube, manufactured by Gallagher Staging with truss, decking and custom Plexiglas, has two back video walls of 3.9mm ArtFox LED tiles. The custom fascia on the top and bottom are made of black Plexiglas. The left and right truss incorporated vertical rows of Robe Spikies, and up on top, an upstage “V” arrangement of Claypaky Mythos 2 helped create dynamic lighting looks with the cube itself.

“We also added smaller custom Plexiglas cube set pieces from Gallagher Staging,” says Amish. “These cubes were set in a staggered arrangement to show depth, with some that appeared to be floating, and each had two diffused RGBA LED Pars, so we could light the boxes and run chases through them. Gallagher provided two carpenters for the tour as well.” 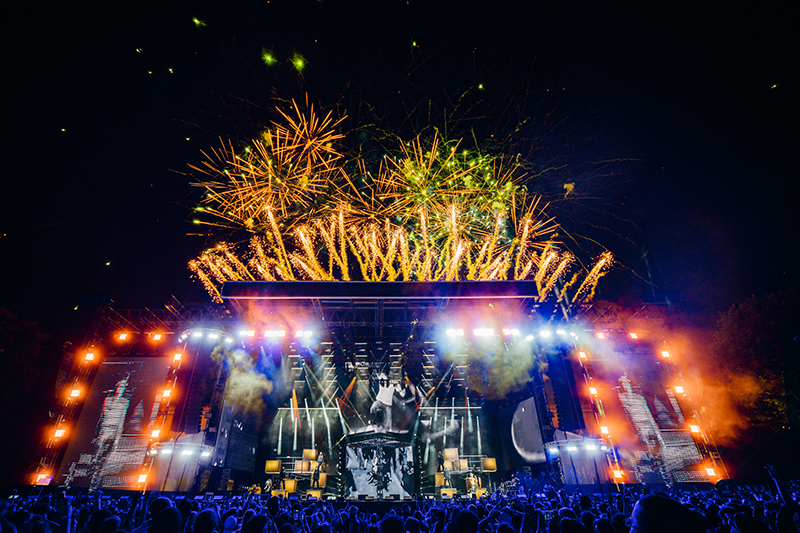 Pyrotecnico created an “over the top full scale display” for the Made In America Festival headline performance by Lil Baby, Amish notes. On tour, Co2, flamethrowers and confetti made up the effects package. Mark Jones was the operator.

Amish has reached a point in his career where he is “very fortunate to not only be surrounded by an amazing team but have been able to work with some extraordinary people as the project demands. Charm La’Donna is definitely one of the most talented people I have worked with in the live production world. She is so creative and is a master at her craft.

“Executing something of this scale during a time of scarce labor, busy vendors, and equipment shortages put us constantly in the mode of adapting and pivoting in somewhat chaotic circumstances every step of the way,” Amish continues. “That is my strength and the basis for the company. I’m detail oriented with the technical knowledge to mold these multiple elements together. I am a producer who puts the talent and the team together and manages that process.” 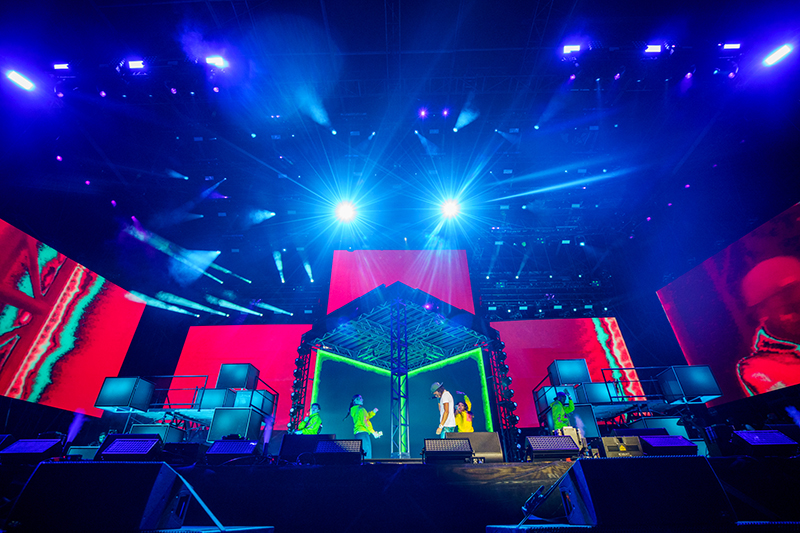 Dancers in the cube. Photo by Amish Dani

Amish himself has had a long journey to this point. After years spent producing diverse types of creative products, he met his first collaborator in the live music space, a content creator working for a wide spectrum of artists. During that time, he kept his eyes and ears open to learning about lighting, Notch effects, production design and occasionally filling in as a production manager on smaller events.

During these years, he schooled himself, homing in on all the production elements it took to create a live performance. Foremost in his mind was the goal to create an environment where all departments were communicating well from the beginning. Introducing a streamline of communication created a cohesive in-tune creative effort, not something where all the separate elements and departments are all just thrown together.

Branching out on his own after that, Amish found work with live visuals pioneer Vello Virkhaus. Virkhaus and his partner Greg Russell brought Amish in as the producer for a Bad Bunny worldwide arena tour and Coachella main stage performance. “His Coachella show in 2019 was my biggest project to date. I was in the hot seat, but after that, I felt I could do anything. The performance was later included in the Coachella definitive documentary. Mike Carson, too, has been an enormous influence on me. Mike is incredibly talented and knowledgeable, and we partner on a lot of projects together. These people showed me what it takes to produce multiple elements from one treatment, and managing it from A to Z. I strive to create a great work environment by giving people the tools they need and treating them well, which I think is why collaborators keep coming back to me and why FRAMEWORX keeps attracting new clients.”