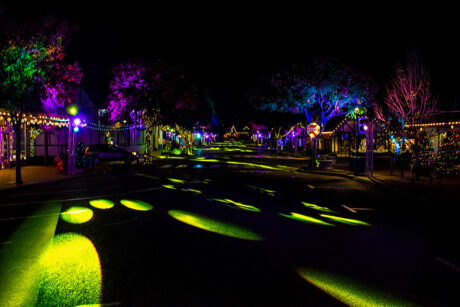 SOLVANG, Ca. – ADJ’s flagship Hydro Beam X2 IP65-rated moving head beam luminaires, as well as the popular 18P HEX IP LED-powered par fixtures, are being used to light up the City of Solvang, CA for its Julefest holiday celebrations. Adding fun, excitement and color to the City’s weekend Christmas Markets, the fixtures have been programmed to create an impressive holiday-themed lightshow.

Located in Santa Barbara County, California, Solvang is a unique city known for its Danish heritage. Featuring distinctive half-timbered architecture, windmills, restaurants and pastry shops serving Danish specialties, and quaint bed & breakfasts, Solvang attracts more than a million tourists each year. However, most visitors tend to come in the spring and summer months to tour the local wineries and enjoy the warm Californian climate, which is why the city is working hard to bring in more visitors at other times of the year. 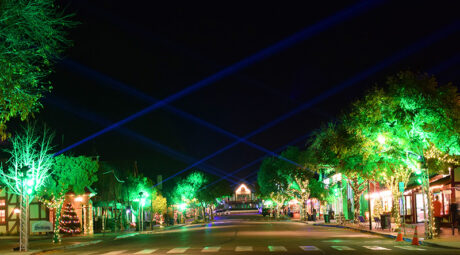 The annual Julefest Christmas celebration is a well-established Solvang tradition, however this year the event is being taken to a new level to encourage more visitors from out of town. Advertised as a month full of lights, celebration, and holiday cheer, Julefest 2019 has been organized by IDK Events on behalf of the City of Solvang.

For the ‘lights’ part of the celebration, IDK Events brought in local specialist Jeremy Cable and his company Islay Events. With over 30 years of experience in the industry, Jeremy studied at the Tisch School of the Arts in New York before embarking on a varied career including theatre work, both on and off Broadway, as well as concert touring. Eventually moving back to his native California, he worked for various companies as a production manager on major events all over the world. Eight years ago, however, following the birth of his daughter, Jeremy decided to launch his own company in order to reduce time spent away traveling and Islay Events has grown steadily ever since.

“The Solvang Lightshow all came together pretty quickly,” shares Jeremy. “IDK Events reached out to us initially for a gear list and I went back to find out exactly what they wanted to achieve. This led to a few calls with Scott Shoemake from IDK, who explained to me what Solvang was trying to do, and I told him that I thought I could put something together in time.”

The brief was to illuminate a three-block section of the city’s main downtown street, Copenhagen Drive, to provide festive mood lighting for the Christmas Market. This runs Thursday thru Saturday nights every weekend in December, with shops and eateries staying open late for Christmas shopping and festive dining. In addition to illuminating the street, Jeremy was also tasked with creating a festive lightshow that would serve as an added attraction for the Julefest celebrations. 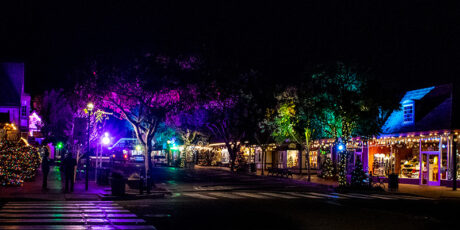 “From the start I knew that we had to be looking at IP-rated fixtures,” Jeremy explains, “because they would be outdoors for an extended period of time and – even though we are in California – this was the middle of the season where we do sometimes get rain. After I’d seen some of the new ADJ gear, and read about it, I felt that it was probably the right choice for the job. And, so far, three weeks into the run, it has worked out really well and we haven’t had any issues at all. It was actually raining quite a bit while we were doing the install. Fortunately, the weather seemed to work with us, as it would let up when we started working in the morning and then started coming down heavy again as we were preparing to finish for the day. However, the fixtures really did get very wet, but each morning when we came back to start working again we’d fire up the units and everything was fine with them.”

To light up the street, as well as the trees that line it and a wooden gazebo in nearby Solvang Park, Jeremy invested in 110 of ADJ’s 18P HEX IP LED-powered par fixtures. With a solid all-metal construction and IP65 rating, these versatile units are ideal for providing multi-colored illumination in any conditions. They each feature 18 x 12-Watt 6-in-1 HEX (RGBAW+UV) LEDs that generate a powerful output and allow for a wide gamut of colors to be created, ranging from rich saturates to subtle pastel shades. In addition, to allow moving beams and projected GOBOs to be integrated into the programmed lightshow, Jeremy also purchased 18 of ADJ’s Hydro Beam X2 moving heads. However, due to the short timeframe between confirmation of the project and the opening night, speed was of the essence.

“I called ADJ,” says Jeremy, “and they were great to work with on what turned out to be a very quick turnaround order. [ADJ Sales Rep] Steve Castillo was always quick to respond, providing all the information we needed quickly, and basically made himself available to us 24-7. I really do need to say a big thankyou to ADJ for really stepping it up in a very tight timeframe and helping to make this happen. Because of the short lead time we didn’t have the opportunity to test everything in the shop first, which we would normally do. Instead we had to do it all on-site, in the rain! But I have to say, all of the ADJ equipment fired right up for us and did what it was supposed to do right out of the box, which really was a saving grace. There were literally no issues; no data issues; no weirdness with getting them to talk; none of the normal problems you have with brand new rigs when you first put them up.” 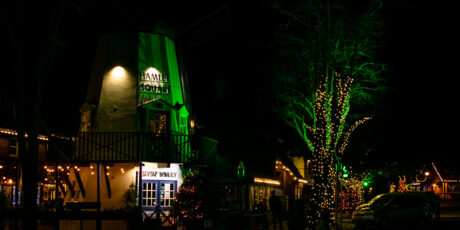 Jeremy and his team deployed 16 Global Truss America Totems, spaced approximately 110’ – 150’ apart, down the length of Copenhagen Drive. Each of these supports four 18P HEX IP fixtures, with a Hydro Beam X2 mounted on top. The DMX signal is connected between the units and between most of the totems using Accu Cable, however for crossing the street a wireless solution was required.

“As well as the WiFLY transceivers built into the Hydro Beam X2s, we used the ADJ WiFLY EXR Battery units to get the data signal across the street. I have to say that I was pretty impressed with these little units, they were very easy to use and made life very easy for us. Because they aren’t IP-rated, we take them down and put them back up each evening, but the in-built battery makes that super-easy to do. We simply use the magnet on the back of the unit to stick it straight to the truss, plug in the data cable, and the fixtures are all ready to go.”

The lightshow features a number of different festive songs, which play at regular intervals throughout each evening. Each track has its own lighting programs, which have been created using ADJ’s myDMX 3.0 software. Meanwhile, music for the show is played through speakers from ADJ’s sister company, Avante Audio. Jeremy and his team setup 16 Achromic A10s each evening, with one positioned at the base of each truss totem.

“We needed something that was cost effective as well as nice and light, so that we could easily pop them out each evening for the show. The Achromic A10 seemed like a perfect choice and they’ve actually worked out even better than we hoped. They are louder than we expected and are very clear. For a plug-and-play standalone active speaker, they are really solid. I don’t have to worry about them, they just do their job and work!”

The star of the show is undoubtedly the Hydro Beam X2, which is ADJ’s flagship IP-rated moving head fixture. Powered by a 370W LL Osram Sirius HRI discharge lamp focused through precision-engineered optics, it generates a piercing 3-degree beam that is ideal for creating mid-air effects either outdoors or in large inside spaces. Packed with features, it offers both 8-facet linear and circular prisms, as well as a frost filter, rotating and replaceable GOBOs, and a 14-position color wheel that includes a four-way split filter.

“I was really impressed with the X2s and so were all my techs,” enthuses Jeremy. “When we were getting them out of the boxes they were all saying, ‘what is this, it’s awesome’! When you pick the fixture up, and feel the weight, you can tell right away that that it’s built well. I’d put it up there with any of the other movers we’ve been working with in the past. For our market, IP-rated at that price point, it is a home run.”

The result of the effort put in by Jeremy and his team is absolutely stunning. The lighting system brings the whole of Copenhagen Drive to life with vibrant color and energetic GOBO projections, while the mid-air beam effects can be seen from miles around. Combined with the city’s distinctive architecture and unique atmosphere, it makes a festive visit to Solvang a truly unique experience.