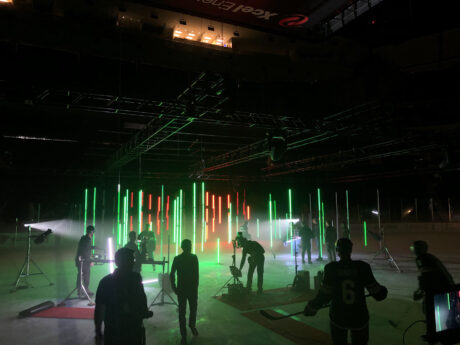 MINNEAPOLIS – A forest of nearly 100 Astera Titan Tubes were used by lighting designer Nook Schoenfeld to create some high impact lighting effects during a sizzle-reel shoot to get player highlights for NHL ice hockey team Minnesota Wild, who are based in the Xcel Center Arena, St Paul, Minnesota. 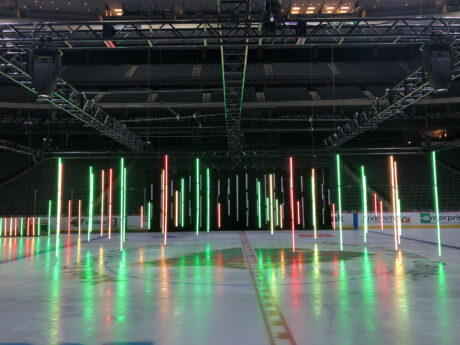 These are shown when the players’ names flash up onscreen before and during a game and are also used to highlight players on televised ads, interstitials and other promotions through a season. These clips are shot during a designated ‘media day’ about two weeks ahead of the season opening each season.

Creative designer Chad Gilmour of the Minnesota Wild worked directly with creatives Mark Hussey and Nook to come up with a new look to produce the footage. Chad brought in DoP Robert Durland who found he needed very little lighting other than four ellipsoidals to shoot through the forest of Titans.

Scott Saja edited the whole piece together. Much of this footage was assembled to be played live on the big scoreboard at the Excel Center during game ceremonies. Production was overseen and managed by Game Operations Manager Sean Zeller (director of Game presentation). Secondary cameras were run by Matt Hussey and Chris Dougherty.

Nook has worked on several lighting projects for the ‘Wild’ together with Legacy Production Group account handler Tony Mahmood. Legacy is the largest full production rental operation in the famous ‘Twin Cities’ of Minneapolis and St Paul, and coordinates the in-house lighting at the Excel Center Arena. 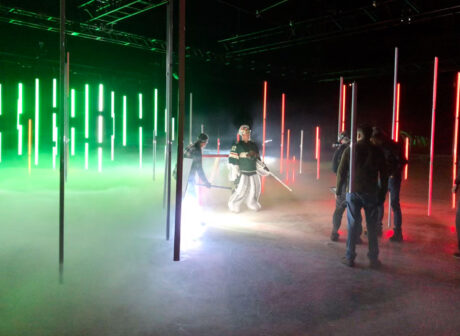 Chad Gilmour wanted lighting that was “totally different” to last year when Nook had specified moving light beams and strobes. In their advance meetings, Chad showed a couple of clips he liked that featured – sporadically – some horizontally hanging tubes and wondered if they could find a new and original way of using these, as he likes their quality of light output.

Nook, himself a bit of an Astera fan, was not short of ideas! The two brainstormed and Nook imagined a ‘forest’ of different length tubes hanging vertically with the players weaving their way through to a predetermined spot, stopping to tee up a slapshot!

Chad was thinking more of aerial views with the tubes forming shapes and colors replicating the team logo and colors. In the end, he was able to achieve just that. They both liked the idea of a kinetic effect through players colliding with the Tubes and setting them swinging!

As it transpired, the players are so skilled at maneuvering on the ice that they could negotiate at speed through the tubes managing the puck “like a surgeon” remarked Nook, initially a little surprised! He enjoyed the chance to be experimental and suggesting ideas without quite knowing how the results would look. 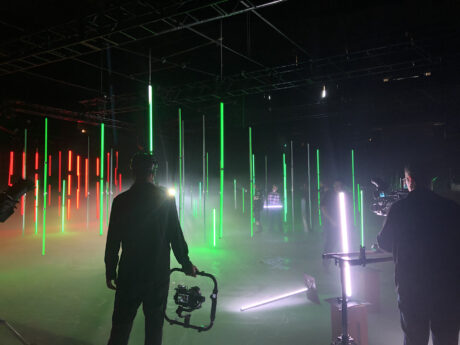 So, 96 x Titan Tubes were sourced from The Legacy Production Group of Minneapolis and arranged in a forest formation and behind these were a series of 4-inch-wide by 3ft long Fatron video strips that acted as a background. They also contrasted with the Tubes, accentuating the rich diversity of colors emitted by the Titans and their positioning added depth to the forest look.

The footage was shot in the middle of the ice rink under the central scoreboard. Astera’s neat attachment enabled Tubes to be butted together into different length strips, and these were hung, seemingly randomly, from a truss gird that the creative team designed which extended just outside the scoreboard’s footprint over the ice.

Around a third of the Tubes were 3 meters long, another third were conjoined in two meters lengths and these were interspersed with the remainder as single 1-meter units.

The trussing was flown about 16ft off the ice and the Tubes attached via black tie-lines in predesignated positions exactly where Nook wanted the ‘trees’ to hang!

The tie line was attached to the screwed-in eyebolt of each Titan Tube and safely secured to the truss by the crew, a process which Nook described as “stupid easy!” and the tubes were all orientated for the cameras. Once each tube was in its resting position, the eyebolt was twisted for fine-tuning and an exact focus. 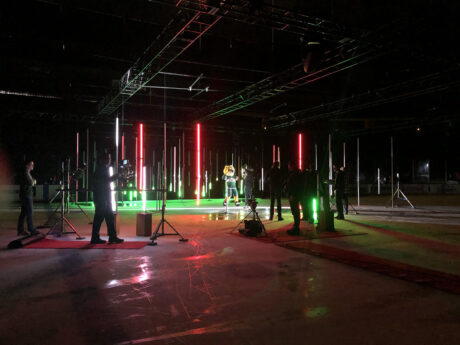 The Tubes ended up centered in the middle with the singles hanging around 5ft off the ice and the longer ones reaching right down to within an inch of the ice. In addition to the hung tubes, another dozen were placed on the ice.

Some of the floor-mounted Tubes were two high, so Tony and Legacy Production Group had some sturdier floor stands fabricated which were perfect – they sat on the ice and were not knocked over by one skater.

Completing the load-in and set up on the day before the shoot, Nook and his team were slightly concerned when they arrived the next morning to find the Titan Tube brains frozen to the touch by being so close to the ice – “but they all fired up like a champ and continued to work,” explained Nook … and they were flashing on for the next six hours. Utilizing the Astera App, the Legacy team could meter the use – it turned out they barely consumed half the allotted battery time in that six-hour shoot.

Nook has been impressed by Astera products since he first encountered them in Germany four years ago and describes their design team as “smart” and “thinking of everything, even with their little LED puck, there’s an option to set an alarm that sounds every time anyone tried to move – or swipe – a Tube!”

On this job, in cold conditions, he really wanted a basic product with great colors and 100% reliability. “On these film shoots you don’t have time to set up for a day and check all the images overnight … we had a five-hour setup call and at the end of that we needed to have all our levels correct and everything had to be ready for shoot director Chad Gilmour as well as the DoP in the AM.”

All 96 tubes ran on one DMX universe as some were double or triple addressed. The director needed to be able to call out a fixture number to Nook at any time and have him change the color instantly.

They were run through a grandMA2 console with a very small wireless transmitter which came from Inner Circle Distribution along with half of the rental tubes. “This transmitter was no larger than a pack of smokes, we sat it right in the tray of the console,” Schoenfeld tells.

Prior to setting up, they realized that within the forest of Tubes there was no easy way to utilize white key light to illuminate the players. A handful of ellipsoidals set up in the corners of the truss provided a base, but it wasn’t really what DoP Robert Durland needed for his shots.

Immediately the gaffers grabbed some of the single tubes on bases and had Nook turn them white, so they were used as key light literally inches from the players’ faces. “With no heat, this was a great function that we discovered in situ. Jeremy would also sometimes request that I strobe a key light, and the end results of this action look fantastic on the playbacks.”

For Nook, the REALLY cool thing about using Titan Tubes on a shoot was that, with lighting coming out at 180-degrees, the gaffer could start a quick clip by having the light face toward the ice, then roll the tube upwards with the camera to a close up on the skater’s face.

“We got some sexy shots we may have missed had we not decided to put the Titans on double duty as hand-held keys,” he concludes, adding that – with no cables to worry about – “the system was fast, simple and absolutely THE right tool for the job.”

Check https://youtu.be/Nw-2f84-cZo for some sizzle reel snapshots and behind-the-scenes clips.