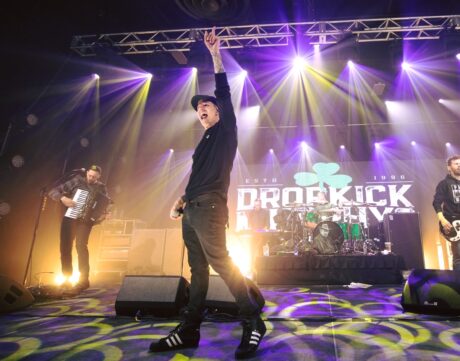 BOSTON – Every year since 1996, Dropkick Murphys has marked St. Patrick’s Day with rollicking live performances of their irrepressible blend of Celtic, punk and rock music. This year was no different… almost! Given the prohibition on large public gatherings due to the coronavirus crisis, the iconic band went digital to reach their fans on the day of Ireland’s patron saint, performing a livestreamed show. Sent out over four platforms – Facebook, YouTube, Twitter, and Twitch – the show was seen by over 10 million fans, making it the most viewed livestreamed concert in history.

Lighting designer Brian Lareau conveyed the energy and excitement of a Dropkick Murphys live music venue performance with a dynamic, fast moving and green-tinged lightshow that featured over 100 CHAUVET Professional fixtures and video panels designed and supplied by Derry, NH-based Events United, which put together the lighting rig and studio set up in 48 hours. 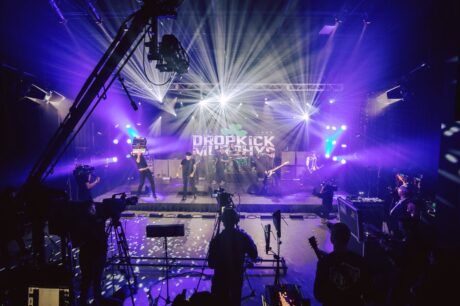 “It was a nonstop effort,” said Tim Messina of Events United. “Everyone involved in this show pulled together in very short time; our team alone consisted of 25 production crew members. It felt amazing and stressful at the same time accomplishing this in the face of everything going on today with the coronavirus. The energy in the studio was incredible. Maybe it was because of the immense amount of pressure to put on something so big in such a short amount of time, or maybe it was the combination of the Dropkick Murphys band and crew working so well with our team.” 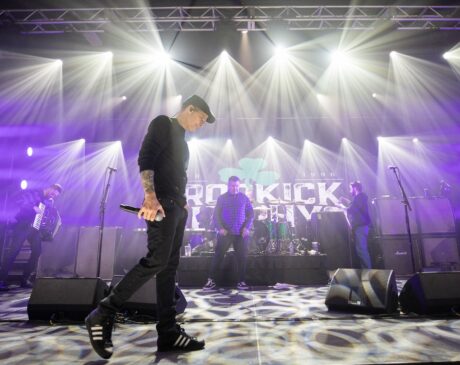 “We had to deal with a smaller stage here than you would normally find on a live venue stage, yet we had to give Brian the tools he needed to create big looks,” said Messina. “The output to size ratio of the Mavericks and low profile of the Ovation Cycs were essential. The whole lighting rig was designed to work well for camera; the brightness of all the lights, as well as the video wall, were crucial to make this work for broadcast.”

For his part, Lareau was able to run his show much as he would if it were a live venue or festival concert. “The only real difference in how the show was operated here verses  any regular gig was limiting some quick solo bumps that you’d normally have,” he said. “We were still able to capture all the dynamics from their faster songs into the moodier down-tempo tracks. There were sections where I could pull back on the fill lighting to let some of the breakups take over, and we were able to keep a number of the tight blackout stops the band is used to seeing.” 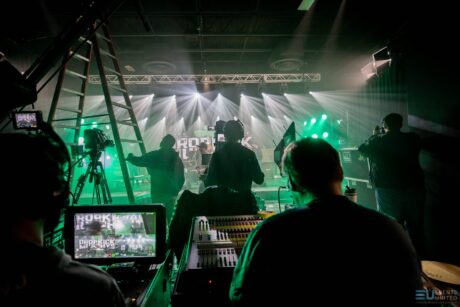 Lareau had special praise for the STRIKE 4 fixtures. “Quite honestly, as simple as they are, they were the real star of this show,” he said. “They’re the only LED blinder on the market that has the correct dimmer curve and fade out built in to look like conventional DWE lamps. There’s no additional funny business with cue timings or any other adjustments in console. You hit the flash button and they react exactly how you expect.” 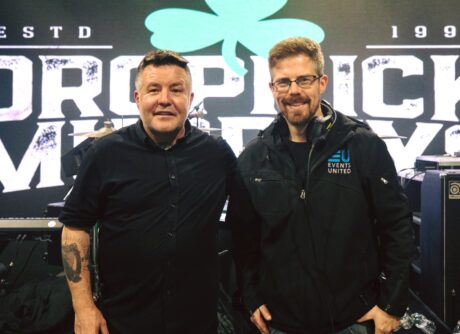 Beyond the specifics of the livestreamed show itself, the event has greater significance, points out Messina. “None of us have ever lived through a time like this,” he said. “How do you even begin to describe the challenge we’re facing as an industry. This is something that we should approach as an industry, not as competitors. We need to share ideas, whether they involve livestreaming or anything else. It’s important that we do what we can to keep moving forward until this all passes.”

Meanwhile, thanks to this determined spirit, there is at least one tradition that has continued this spring despite the coronavirus.