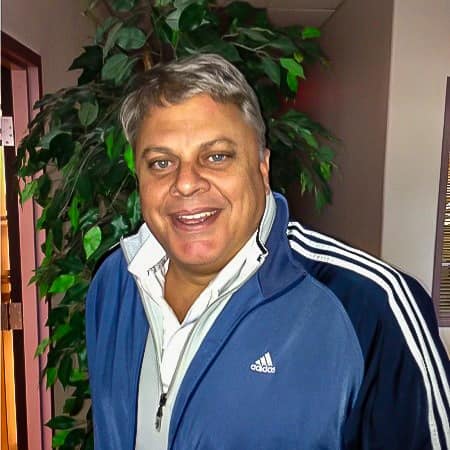 As we previously reported Tim Brennan passed on Monday, December 27th, 2021. All of us at Timeless Communication and PLSN magazine send our condolences to Tim’s family, friends and colleagues on this loss, both personal and to our industry.

Funeral Services will be at Our Lady of Las Vegas Catholic Church on Wednesday, January 12, 2022 at 1:00 p,m. with a Celebration of Life immediately after at the Crown and Anchor Pub at 1350 E. Tropicana Avenue in Las Vegas.

Timothy John Brennan was born in Hackensack, NJ on October 25th, 1965, to June (McCormick) and Jim Brennan of New York and Chicago respectively. Little did the world know then, but a force of nature had been unleashed upon the planet.

Tim was quickly embraced into the Brennan Clan. As with all families there was good and bad, however, Tim had the good fortune to grow up in a loving and loud family. He learned to express himself, stand his ground, look for the humanness in everyone and make sure that he could “look himself in the mirror every morning”.

The Brennan Family moved to Las Vegas, NV in 1968 when Jim Brennan opened Cinema Services. Tim quickly adapted to desert living. He loved the desert so much that he became one of the “desert rats” in the Winterwood neighborhood. He was one of the boys who stayed in the sun so long he never lost his tan (summer or winter). Tim attended St. Peter’s Catholic School in Henderson and then transferred to Las Vegas Day School. During this time, Tim’s mother was Miss June of the syndicated Children’s TV show Romper Room. Because of this being a live show, Tim had the distinction of being the male understudy. He could end up appearing on the show at a moment’s notice. This had to be the beginnings of his love of all thing’s theater. Las Vegas Day School had a sports program as well and Tim was a member of the LVDS Basketball team. That team not only fostered his love of sports but cemented relationships with some of the closest friends he had in his lifetime.

Tim attended Bishop Gorman High School from 1979 thru 1983. His interests had begun to widen, and he became a member of Youth for Understanding and was an exchange student for the school year of 1980/81 in Melbourne, Australia. The year was a benchmark for Tim, he lived with a family and attended school in Melbourne and then would travel to visit his brother, Seamus, who was dancing at a Casino Production in Tasmania. While at Mazenod College in Melbourne, he used basketball to develop friendships. He taught them the “run and gun” style of the UNLV Rebels which resulted in Mazenod winning their Basketball Championship that year.

Tim returned from Australia a seasoned young man. He completed his high school years at Bishop Gorman, graduating in 1983, but at the same time was spending more time with his dad learning what was necessary to be in Entertainment Production. To be able to watch firsthand and comprehend what was required to “create a show” from a master gave him some of the most important lessons of his life and ones he never forgot.

Tim attended a few colleges before he decided on the one. He spent a year at Saddleback College in Mission Viejo, CA, another year at Dominican University of California in San Rafael, Ca and attended University College in Oxford, England where he received a certificate in International Studies. Ultimately, he decided on University of San Francisco which he attended from 1985 thru 1989 and graduated with a double major in Government and Philosophy.

Always a special place for him, Tim made good use of his time in San Francisco. Besides his college studies, Tim worked as an intern for the San Francisco Board of Supervisors and fostered his lifelong passion for The Grateful Dead.

After graduation, Tim went to New York to study acting. It had always been in his blood, and he decided to give it a shot. He spent a year in New York studying and then decided that he wanted to spend his time behind the scenes and came back to Las Vegas. He officially started at Cinema Services in January of 1991 as the Counter Sales Manager, and he ended up as Director of Sales. Tim left Cinema Services in October of 1995. The main reason was the passing of his father in August of 1995. Tim was heartbroken as Jim Brennan was his hero. There is not a challenge that Tim faced that he would not ask, “What would Jimmy do?”

Tim had worked with Mark Rowlands from Towards 2000 in Burbank and became the General Manager for the Las Vegas Area in June of 1996. He then worked for Matthews Studio Group as General Manager in Las Vegas starting in March of 1998. During this 4-year period, Tim was honing his skills as a salesperson and was becoming widely known in the industry.

In 2006, Tim was employed by PRG. He was a Vice-President and worked at the company for 16 years until his passing. Tim was involved in all aspects of entertainment lighting and audio-visual production which included both sales and rental. There is not a property on the Las Vegas Strip that Tim did not contribute to in some capacity. He was extremely proud of PRG’s work in the industry and the part that he and his colleagues played. He always counted Jere Harris as a mentor and a friend.

In his personal life, Tim was above all a family man. Tim met Paige Woodward at a family friend’s house in Laguna Beach where he reportedly sneaked a kiss. From there, the rest was history and Tim and Paige married in May of 2004 and of course settled in Las Vegas. They had two beautiful children, Kennedy and Blakley. Jim and June had fostered a deep love of family and Tim continued down that path. He loved his children and considered them his crowning achievement with Paige. Tim was incredibly devoted to his family. He and his son totally bonded over Tim’s love of baseball, leading to Kennedy becoming the top-notch player he is today as catcher with Bishop Gorman High School. Tim and his daughter shared a love of trivia and intellectual sparring on a level that went well beyond her years. He was a member of the Knights of Columbus, 1st degree and was involved in the Boy Scouts of America. From September 2011 thru June of 2016, Tim was the Cub Master of Pack 99 whose Charter is with our Lady of Las Vegas Catholic School in Las Vegas, NV.

Tim had a deep-seated sensibility for people. He had the innate ability to look through to the real person, start a conversation, and connect on a deeper level. He also had the capacity to think out of the box. The ability to explore ideas that are creative and unusual and not limited by rules and tradition. These facets of his personality served him well in his private and professional life.

Tim had a big heart. His appreciation for a good laugh, a good story, and a good song made him a person that you always wanted to be around. He will be missed.

Tim is survived by his wife, Paige-Woodward Brennan, and his children, Blakley (11) & Kennedy (15), as well as three of his siblings, Barbara, William, and Monica. 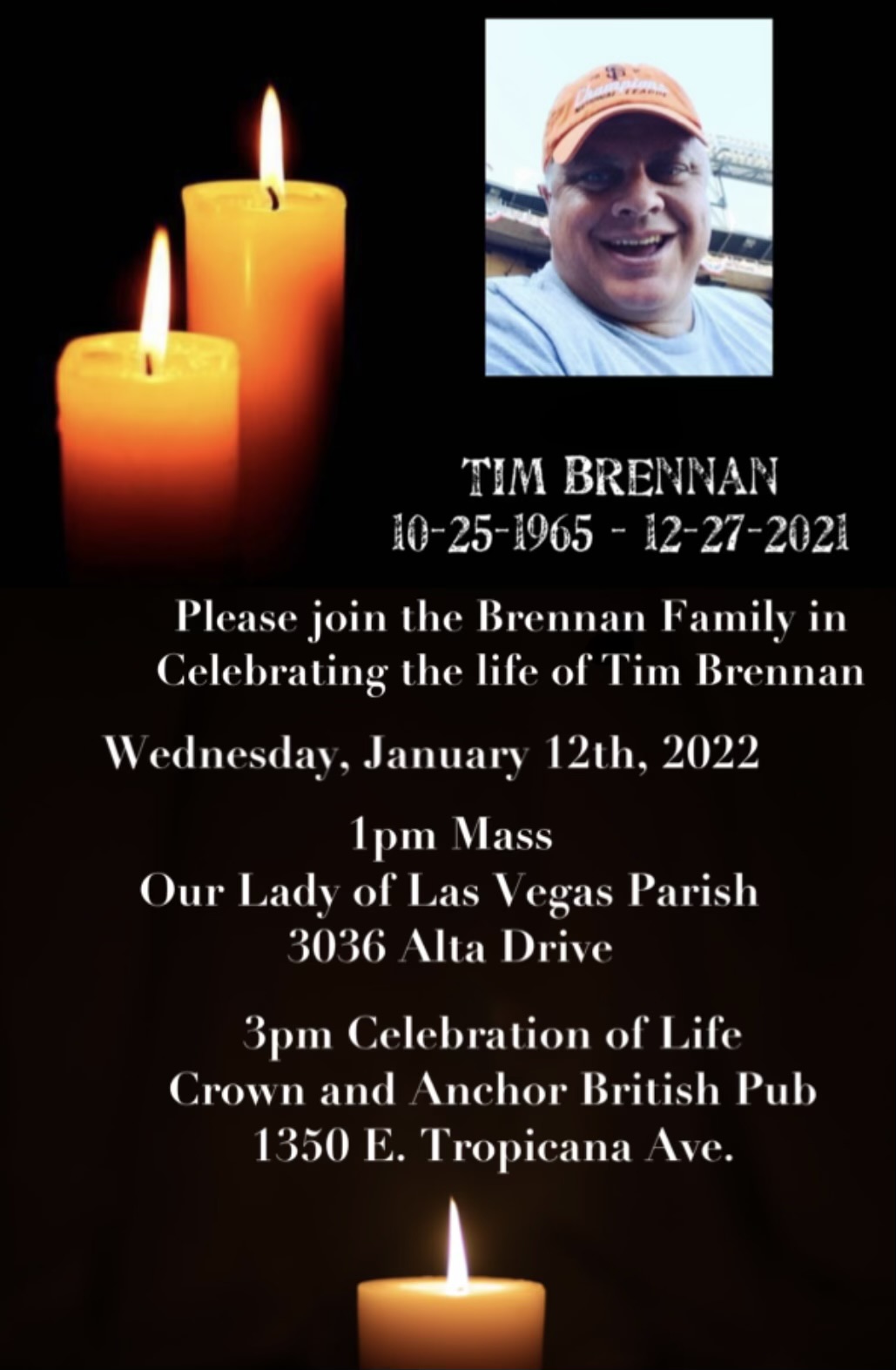