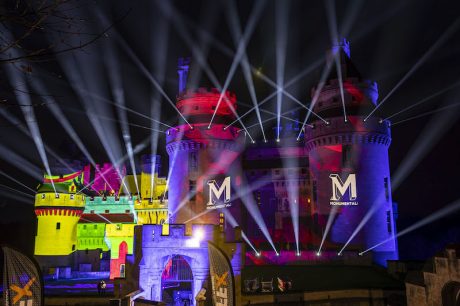 The Monumental Tour–an innovative visual and musical performance which was the brainchild of French DJ and music producer Michael Canitrot and visual activists AV-Extended–played a spectacular final location at the end of November at the Chateau de Pierrefonds in the picturesque Oise region of France, northeast of Paris.

Delivered in conjunction with French cooperative bank Credit Mutuel and other sponsors, more than 100 Robe moving lights supported the mapped projection show specially devised for the unique set produced by Canitrot for this closing show. It took references from the history of the imposing Castle, originally constructed in the 12th century, and extensively rebuilt in the mid-19th century at the behest of Emperor Napoleon III, and wove these into an all-encompassing, immersive, and beautifully rhythmic electronic musical experience.

The Monumental Tour has been an incredible journey that has combined streamed music performances and collaborations with epic, iconic and outstanding monumental sites all around France. It started back in the summer at the Phare des Baleines (Lighthouse of the Whales) on the Ile de Ré. 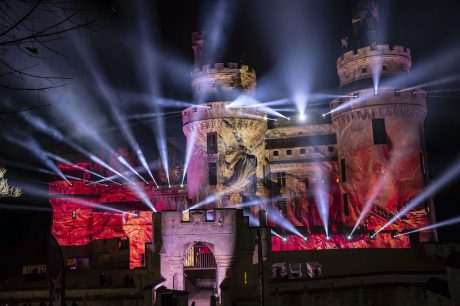 Since he was a small child, Canitrot has loved visiting castles and museums and describes The Monumental Tour as “The meeting of my two passions – electronic music and heritage / history,” adding that being able to play his music in exceptional and unexpected places has “nourished my inspiration.”

For the final show in 2021, Paris-based freelance Lighting Designer Mikael “Mika” Trochu was asked onboard by the project’s technical managers Martin Javouret and Adrien Demengel and tasked with lighting the castle’s stunning front façade. The event was recorded for later broadcast Dec. 19 and enjoyed live by a specially invited audience.

Trochu was delighted to be working with Robe moving lights on his first Monumental show – including MegaPointes, FORTES, ESPRITES, miniPointes, Spiiders and Tetra2s, all provided by Paris-based rental and production company MDL Event, the event’s technical partner. Trochu has been using Robe products regularly in his work for some time and thinks they offer great versatility, quality, brightness, and reliability as well as being designed to be compact and practical.

The key role of the lighting was to complement and work alongside the detailed and enigmatic projections co-ordinated by AV-Extended’s Jérémie Bellot, which covered a 60-meter-wide span across the castle’s front facade stretching 50 meters high up to the tops of the walls and turrets. 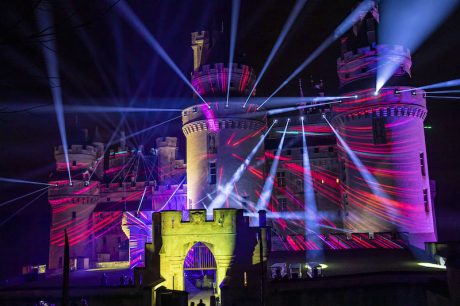 The challenge was in ensuring that the lighting was finessed and elegant, harmonious with the music and assisted the narrative of the piece, with both lumens and projections sculpted seamlessly into the contours of the castle, respecting its stoically majestic architecture. Each Monumental show is composed of what Canitrot describes as the tour’s “artistic DNA” and is sculpted specifically for the location and includes abstract references and interpretations–both visual and musical–related to the history and relevance of the building.

The 42 MegaPointes were chosen by Canitrot, who is extremely involved in all aspects of the Monumental project as creative director as well as music maker. Technically savvy, he loves using technology to help share his art. “The whole Robe range is absolutely amazing,” said Canitrot. “There are so many possibilities which feed our ideas and enthusiasm for discovering these monuments and depicting them from a new and very contemporary perspective.”

The MegaPointes were also the most noticeable out of all the fixtures, positioned individually around the various castle battlement crenellations at different heights, and poking through the windows of the three main towers on the front façade. Having lights on multiple levels brought a real sense of depth and dimension to the bigger visual picture.

The power and visibility of the MegaPointes was vital for those beams-in-the-sky moments in the set, and even on a dark night with no smoke, they blasted boldly through the darkness. They were also picked for their small size. Rigging was a longwinded and laborious manual haul up to the various parts of the castle by the MDL Event crew who placed each unit individually into position around the massive building. This was accomplished with a lot of collaboration with the team, who maintain and run the dedicated historic monument.

Sixteen Robe Spiider wash beams were deployed in various places around the castle up-lighting and highlighting elements of stone and walled areas. Eight FORTES were rigged on a circular truss on the floor inside the large castle bailey (courtyard) representing a new metaphorical tower of light beams. They provided feature lighting and camera candy effects for Video Director Anthony Ghnassia to blend into the mix, which included drone footage from the Skydrone France team. These fixtures projected gobos, texturing and colors around the impressive courtyard, which was illuminated with LED floods. 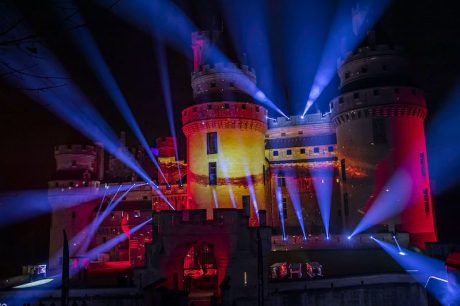 The eight miniPointes and four more Spiiders were used to highlight the architecture and pick out artifacts and detail in the castle chapel, where they worked brilliantly with the white stone and statues.

Canitrot’s DJ booth was set up in front of the main gateway into the castle, with the designated public area on the other side. Immediately behind the artist were four ESPRITES for back lighting and silhouetting and gobo animations for the camera. In front of his setup were two lines of Tetra2s forming a pathway up to the DJ booth–for another depth effect–which also produced some spectacular camera looks especially for the drones and the wide shots. A bonus with using all these Robe fixtures was the low power consumption. Power was available from various points around the castle, but it was generally limited, so this was a carefully calculated balance.

The load-in took place over two full days, plus the show day, with one–very cold–night of programming on-site with the full rig in situ, preceded by three days warmer previz in the MDL Event studio using L8 3D visualization software. 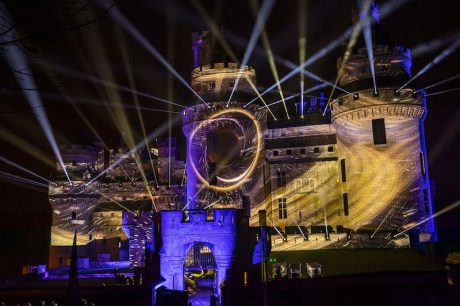 Lighting was programmed on a grandMA2 light console positioned in the back of a truck parked in the public viewing area, and all of it–lighting and projection–was run to timecode from the music track for the 45-minute show. Working on this show was something special for Trochu. “This is such a unique monument and to be able to light it in this imaginative way and work alongside such a talented team of creative and technical people, is a great honor,” he said.

For Sébastien Dendele and Sebastien Barry, president and CEO respectively of MDL Event, it was a pleasure to support Canitrot and be involved in the Monumental Tour. “All of us in this industry are driven by passion, so it is great to work with other like-minded people,” said Dendele. “Highlighting French monuments is a fabulous opportunity to present a modern approach showcasing the talent, flair and imagination of our professionals and creatives, as well as illustrating exactly what our job is about to those who might not know about the power and impact of technical production!”

Canitrot added, “Pierrefonds is a unique place, full of history and with a distinctive soul. As a place significant to so many people over the centuries, giving it a new dimension that helps make it discoverable, enjoyable and appreciated in a different way is my humble contribution to its incredible history!”