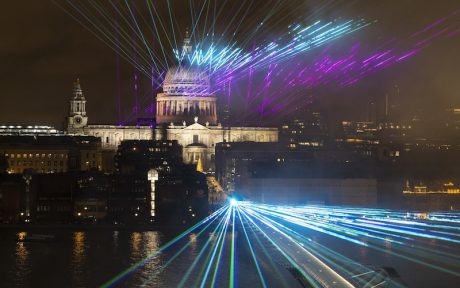 London welcomes 2022 with a midnight display of lasers and fireworks against the back of St.Paul’s Cathedral. Photo © Andrew Baker

In 1999 the Greater London Authority wanted to do something special to mark the arrival of the new millennium, so they hit upon the idea of creating a 20-minute pyrotechnic extravaganza complete with a “River of Fire” on the Thames. Millennial fever has faded into history, as has Y2K and the River of Fire idea, but happily, what remains of that venture has emerged as an extraordinarily popular New Year’s Eve tradition.

The London New Year’s Eve Fireworks has attracted millions to the city every Dec. 31. Although safety protocols restricted crowds in London this year, the celebration was as popular and breathtaking as ever, garnering its customary huge audience of BBC viewers.

Developed by Jack Morton, the global brand experience agency, working in partnership with the Mayor of London’s office, the celebration features an impressive 13-minute firework display, kicked off by the ringing of Big Ben’s iconic bell, and a Durham Marenghi lighting design that covered the entire downtown. 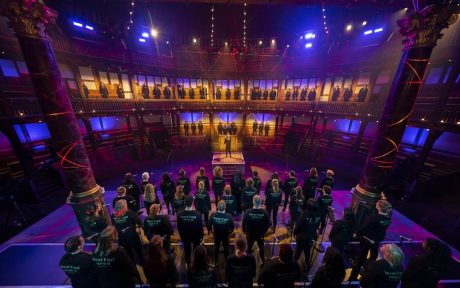 As it spanned such a wide area, the NYE lighting was divided into two sections: Central London and the Old Royal Naval College. Associate Designer Paul Cook ran the lighting in the first section, which included the Globe Theatre and St. Paul’s.

Cook used his ChamSys MagicQ MQ500 console to run the 12-Universe show at the Globe Theatre and an MQ80 for the 8-Universe St. Paul’s rig. Both featured an array of dazzling looks, such as when St. Paul’s famous dome was immersed in stunning web of lasers by ER Productions’ Mark Payne. Each of these visuals was precisely timed to flow seamlessly with the TV broadcast, no small feat, but accomplished smoothly, thanks in part to some adroit programming skills.

The entire light show for the evening was preprogrammed and visualized on WYSIWYG and Depence2 to create a smooth work flow with no surprises for the client and the BBC, as there were to be no public rehearsals

The in-built visualizer on Cook’s ChamSys consoles allowed him to check focus and programming details so he could fully preprogram his show prior to getting to the site.  He brought the visualizer and patch into the console via a MVR file from the lighting plan data, so no actual redrawing or patching needed to be done. This saved him a great deal of time, as only slight morphing of fixtures was needed to achieve a fully functional and patched console prior to plotting.

Elaborating on how his consoles helped him meet the challenge of preprogramming and executing his show with such precision, Cook said, “We had to ensure that the lighting of the live action sequences were balanced; so, the Group Master functions were used extensively to control the balance for the TV, thereby ensuring the exposures were under control. Also, the ease of programming and morphing new fixtures was great in allowing me to accommodate rig changes very easily.” 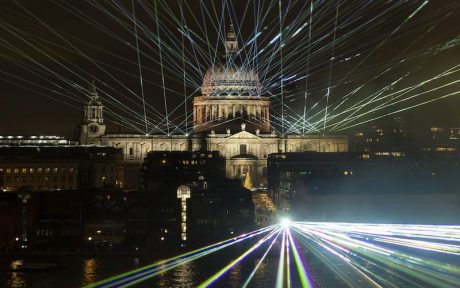 The Execute Fader feature of his consoles also helped Cook manage his complex show under time pressure. For example, on those back up consoles that did not have the required number of faders, he was able to use his Execute Faders as GM masters.

On the subject of dealing with time pressure, Cook praised the efforts of Rob Watson and the team at Lights Control Rigging for installing a “faultless system” at the Globe Theatre and St. Paul’s.

The smooth teamwork made for a very happy New Year’s Eve, a night on which “hope smiles for the threshold of the year to come,” as poet Laurette Alfred Lord Tennyson once wrote many New Year’s ago.