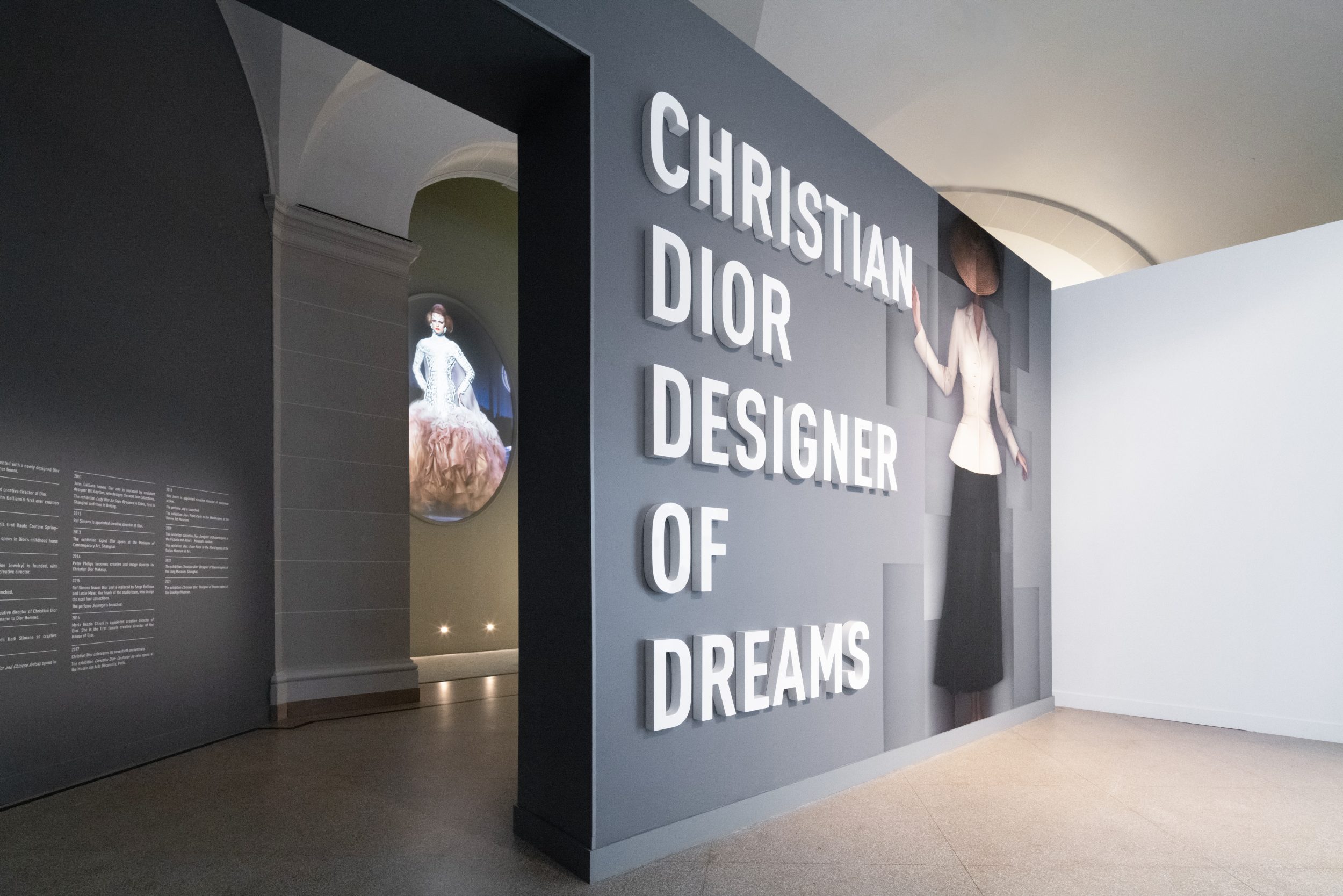 New York, NY—The New York premiere of the exhibition Christian Dior: Designer of Dreams opened at the Brooklyn Museum on September 10, 2021 and traces the groundbreaking history and legacy of the House of Dior. The exhibition brings to life Dior’s many sources of inspiration—from the splendor of flowers and other natural forms to classical and contemporary art. With objects drawn primarily from the Dior archives, the exhibition includes a vast array of over two hundred haute couture garments as well as photographs, archival videos, sketches, vintage perfume elements, accessories, and works from the Museum’s collection. 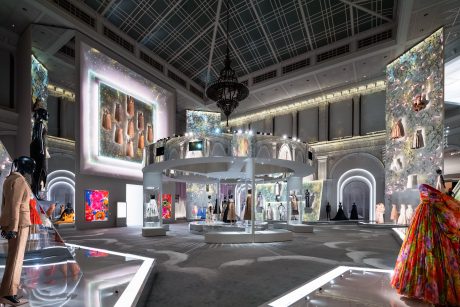 Presented in the Museum’s magnificent 20,000-square-foot Beaux-Arts Court, the extensive exhibition installation designed by Agence NC, Paris, required dozens of trailers of custom scenic fabrications and an extensive lighting and audio/video system developed by WorldStage. The lighting design, by Lightemotion, Montreal, provided dramatic illumination of the garments and other artifacts while staying within the light level limits required for these very rare and fragile objects. The audio/visual systems designed by WorldStage support the design created by La Meduse, Paris and include various contextual displays, archival footage and the pièce de résistance, an element in the main atrium entitled “The Enchanted Garden” that features a fully immersive projection environment.

Due to the constraints of designing, planning and implementing an exhibit of this scope during the COVID-19 pandemic, the design and production teams worked remotely under severe time pressure. Despite the challenges, the exhibition was delivered to the standards expected by the exhibit designer, Agence NC, and the ultimate client, Dior, and opened to a rapturous response.

Exhibit Lighting
The lighting design for the exhibition called for miniature spot and wash fixtures in very large quantities – a departure from the standard show complement of track fixture PARs, ellipsoidals, and automated fixtures. The complement included 650 miniature LED Eklipse Pixis spot fixtures and more than 500 ETC LED Mini Lekos as well as more than 100 LSI BPM Mini LED Projector fixtures. The unusual approach was dictated by the demand that all equipment, including lights, projectors, speakers, etc., be hidden from view wherever possible. As stated by the exhibition designers, the performance of the technology “must be as if it is magic.” 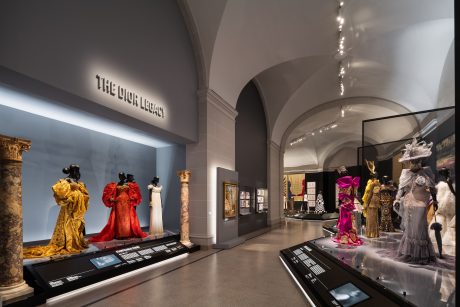 Therefore, the hundreds of fixtures were individually installed within each of the many set pieces, along with careful placement of controllers, power supplies and other accessories. Working in close collaboration with the project scenic fabricator, Showman Fabricators, cable pathways were designed to conceal the miles of power and control cable within the complex scenic designs.

Terry Jackson, WorldStage Vice President, Director of Lighting, commented, “Every once in a while, a very special project comes along, and this Dior exhibit was certainly one of them. From the very first moment we saw the exhibition renderings, we knew that this was a special job, and we had to be a part of it.”

Exhibit Audio/Visual
The visual component of Christian Dior: Designer of Dreams utilized thirty content streams hitting projectors and monitors of different types. The different display configurations ran the gamut from standard 16:9 to ellipsoidal to 360-degree immersive, ratcheting up the challenge for the video system designers and programmers. 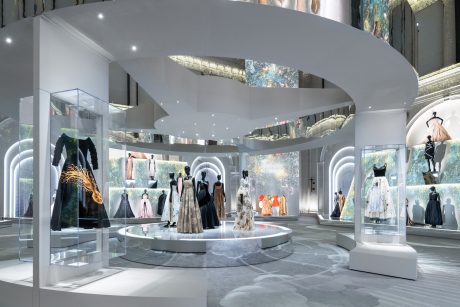 Projection System Designer Josh Weisberg stated, “The variety and quantity of display configurations are amazing to see in one exhibit. The design called for a pixel-perfect ellipse at the entry, ultra-short throw projection in a number of places, projection on multi-layer scrim and star curtains, monitors with multiple picture-in-picture scenic inserts and then there was one of the most challenging immersive designs I’ve worked on; The Enchanted Garden.”

Weisberg continues, “The atrium space at the Brooklyn Museum is a large beaux-arts interior space – very beautiful, with columns, arches and lots of other detail – that was completely mapped. In addition, the mapping continued onto large three-dimensional scenic pieces placed throughout. Projector placement had to be exact and planned in advance, so I relied on the Mapping Matter application to support the 3D modeling and it was spot on. Overall, the visuals created by La Meduse perform a visual magic in the space that sets just the right mood for admiring the objects.”

For the Enchanted Garden, WorldStage provided 8-UDX 4K40 projectors and 3-UDM models fed from a disguise media server system. For the other exhibits, a combination of Panasonic PT-RZ970’s and Optoma projectors were used, all fed from a Brightsign media playback network.

The playback and control systems were designed and programmed by Lead Programmer Briana Torres who added, “While the project was made more challenging by the time constraints and the remote work calls across multiple time zones, the crew, especially my assistant, Nico Schiavone, put out maximum effort and that resulted in a highly-reliable system that runs with relatively little operator intervention.”

In addition to the visuals, Weisberg designed a compact sound rig using d&b audiotechnik, JBL, and Meyer Sound components for the Enchanted Garden and other exhibits. 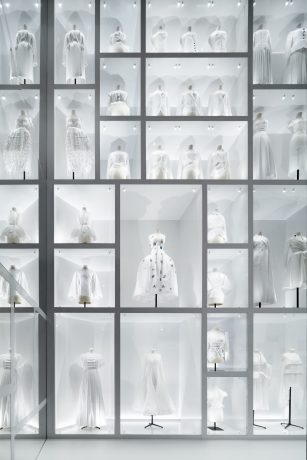 AV project management for WorldStage was handled by Tommy Boyd, lighting install project management by Regan Dodson who worked around a tight schedule that necessitated round-the-clock crews working in lockstep. The team also had to mitigate equipment delivery delays due to supply chain issues, as well as other pandemic related issues, including the need to provide proof of vaccine for all crew on a one day’s notice.

Jackson concluded, “Although this project was extremely challenging, by focusing on the finish line, budget target and the desired result, everyone involved displayed the kind of determination that is a true testament to our New York City energy, work ethic and professionalism. It’s a rare opportunity to collaborate with such demanding and talented design/production teams, and we are absolutely thrilled with the results.”

Christian Dior: Designer of Dreams is on view through February 20, 2022, at the Brooklyn Museum, 200 Eastern Parkway, Brooklyn, NY