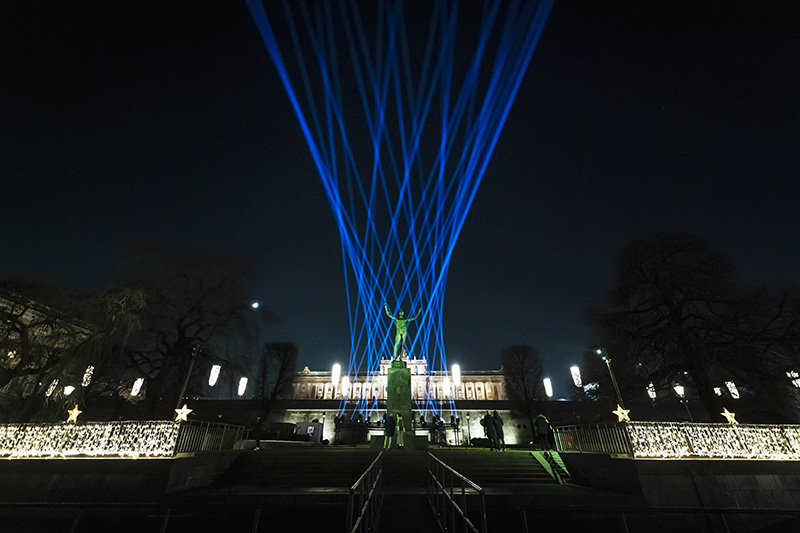 For the second year, Nobel Week Lights Stockholm was presented as part of the city’s Nobel Prize celebrations from December 4-12, 2021.

Nobel Week Lights Stockholm was organized by The Nobel Prize Museum and featured some 20 artistic installations inspired by the Nobel Prize and its winners’ achievements.

Jönsson’s “Dialog” was located on Strömparterren, a small island in the center of Stockholm near the royal palace and parliament, and visible across the city. It was inspired by the Nobel Prize in Physics that Charles K. Kao won in 2009 for “groundbreaking achievements concerning the transmission of light in fibers for optical communication.”

“The concept consisted of strong, animated light rays directed towards the sky. Bright moving light fixtures will produce a cluster of strong light rays similar to what happens on the inside of fiber optic cables,” explains Jönsson, a multi-award-winning lighting designer and head of Eyebrow Designs. “What we experienced was the light – full of information – animated, moving, pulsating, flickering and colored in different sequences and patterns to symbolize the gigantic flow of information that daily passes through all the world’s fiber cables and binds people together. The rays were so strong that weather phenomena, such as clouds, snow, rain and fog, were hit by the light in unique ways, becoming a constantly changing receiver and background in the installation. The dialog happening in the world’s fiber optic cables is constantly ongoing and changing, just like the light in this installation!”

Jönsson’s design consisted of two concentric truss circles with the smaller 8-meter circle inside the bigger 12-meter one. Sixteen Xtylos Aquas were mounted on the bigger truss and 14 on the smaller; the fixtures were positioned to point up at the sky. “The idea was to let the circular shape of the fixtures represent the core of a fiber optic cable – we were seeing the light inside the cable without the insulation,” he points out. “The trusses fixed the lights in a perfect circle and kept the fixtures and cables off the ground and out of any water that might gather there.”

Jönsson used Xtylos fixtures for the first time at ”Melodifestivalen” 2020, an annual Swedish song competition and the Swedish selection show for Eurovision Song Contest, which Jönsson lit three times. For the “Dialog” installation the lighting designer “needed a fixture with as much intensity as possible in order to reach high up into the air,” he says. “Since I have been using the Xtylos fixtures indoors for various applications, I knew they had the punch and texture I was looking for. And, of course, I needed a IP-rated fixture that could survive any harsh weather conditions we might have.”

He notes that, “the punch Xtylos Aqua packs is just amazing. The RGB source can produce colors at great distance and with the power that no other fixture can. In addition, the red is just out of this world!” He points out that on clear evenings “it looked like the beam from the fixtures never ended, it just kept going into space. And when we had clouds, I had 30 ‘bat signals’ painting the sky!”

According to Jönsson, the fixtures “performed very well” and held up under some punishing weather. “We had very chilly weather some of the days of the festival, and the Xtylos Aquas survived minus 14º C. for 48 hours without any hiccups. There was also some snow, rain and fog during this time. As always, Claypaky and Interlite supplied the best service and support.”

Jönsson is also grateful to the Nobel Lights committee for its support of “Dialog.” “They let me realize this idea and were very supportive from the first day we spoke about this concept,” he notes.

Lara Szabo Greisman, Co-initiator and Co-producer of Nobel Week Lights, adds that, “‘Dialog’ was an absolute audience favorite,” during the festivities. “The public came out enthusiastically despite the freezing weather, and more than 60 fully-booked guided tours took place. We are seeing thousands of images on LinkedIn, in the press and on social media showcasing ‘Dialog.’”

For more from Claypaky, visit www.claypaky.it