NASHVILLE–Award-winning, multi-instrumentalist Brian Culbertson recently wrapped his 2021 tour with a lighting system provided by Bandit Lites. The American smooth jazz/R&B/funk musician recently released the first album of his new work, The Trilogy, Part 1: Red.  Lighting designer André Petrus chose fixtures that would give the show both individuality and consistency. “Brian runs a tight ship,” said Petrus. “This is a bus and trailer tour with a large band. Our options were extremely limited given trailer space and, more importantly, budget.”

“I’d say the most important fixture in the system was the Elation Smarty Hybrid as (Lighting Director) Dominic Hickman used almost every feature of that fixture,” said Petrus.“Smartys were really the eye candy and spot fixture of the whole design,” said Hickman. “They gave nice beams when you needed it and a great wash as well. I was blown away with how versatile the fixtures were; the prism had an amazing effect we used in one of Brian’s new songs. You could see everyone get their phones to take pictures just because it really set the mood for that song.”

“Brian handed me a setlist and some notes and I came up with some color combos and general programming direction for Dom to run with,” Petrus said. 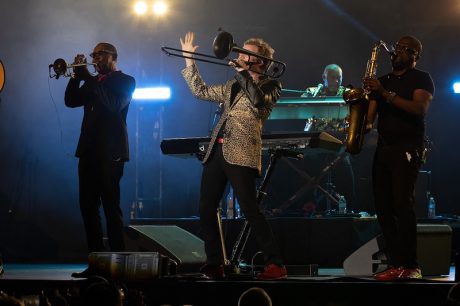 “Brian wants everyone to be a part of the show, and it’s great!” said Hickman. “There are a lot of hits and bump cues that he has during the show that brings out so much energy. Every night we added something new.”

Hickman faced integrating the venues’ house rigs into the tour rig, blending the two so the completed system looked as though it was always part of the show, a feat he pulled off every show. He previously ran lights at a church Petrus attended, and after graduation, Hickman credits Petrus with taking him under his wing as a mentor.

“This was a great opportunity for me to work with Dom in producing this show,” said Petrus. “He reminds me of how I was when I was his age, so I have been taking the opportunity to get him up to speed on my workflow and get him trained for the big shows. There’s lots more to come.” He referred to Bandit’s prep as second to none, sharing, “Bandit always provides me with gear (no matter the budget) and always prep it as if it were going out for years.”

“I loved how everything was labeled,” Hickman echoed. “I knew where everything was on dimmer rack; the cases were clearly labeled with what was in it and where it lands on stage. It’s something so important, and Bandit hit it out of the park.”

“Every aspect of this production was incredible,” said Bandit Lites Client Representative Shawn Lear. “André and Dom’s use of the lighting was next level; we are so proud to have been able to work with this entire outfit.”