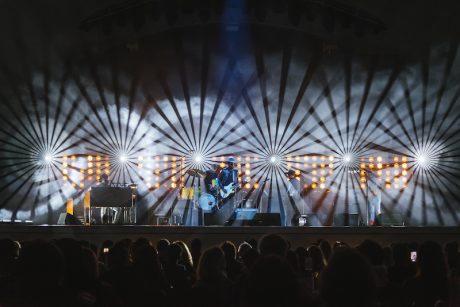 Clark kicked off the tour in late August in Austin, Texas and played dates across the west, southeast and northeast before a final stop Nov. 17 in New Orleans. Lite-Tek provided the floor lighting package for the entire tour and added a flown package in select cities. John Adamo, the Lighting Director for Clark, has worked with the artist since Clark’s fall 2018 tour.

“We bought the first Sharpy Plus fixtures in North America almost three years ago,” says Lite-Tek Owner, Darren Lewis. “Since then, we’ve tripled our inventory and are still running out – every one we own was out last week.

“Sharpy Plus is such a versatile, workhorse fixture,” he notes. “It’s difficult to beat them for their weight, size, output, feature set and price point. Concert touring is the majority of our Sharpy Plus users, but we also use the fixtures on one-offs – we had units with Billy Strings recently – and in the winter the cheerleading competitions like them.”

The fixtures certainly filled that role for Gary Clark Jr. where John Adamo put six Sharpy Plus on the set carts’ custom side arms for the floor package to back light the band and create aerial effects. In select cities an additional compliment of Sharpy Plus fixtures were flown: six were staggered on upstage and midstage trusses to build layers for aerials and lighting effects.

“I chose Sharpy Plus because the fixtures needed to be versatile to meet the needs of a tour and they had to match up well with any house fixtures,” explains Adamo. “Sharpy Plus has incredible output, optics, saturated colors, and cool gobos and breakup for back light effects.” 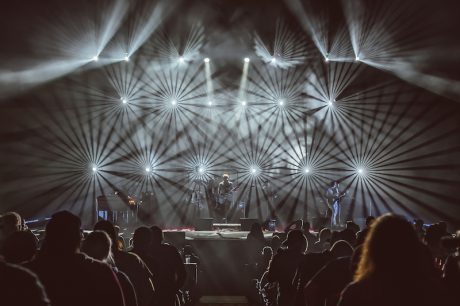 He says that the fixtures “found their way into just about every song in the show from creating band highlight looks to being part of the big fly outs and big aerial looks we like to do. The Sharpy Plus’s cone gobo was a particular crowd pleaser. We used it during two moments in the show: The gobo broke the beam into a cone of light and when we zoomed out and used it as a back light, it was pretty dramatic.”

Adamo reports that “Lite-Tek is one of our favorite vendors. The Sharpy Plus fixtures performed flawlessly throughout the whole tour. We never had to go to the spare.”

Lite-Tek’s Lewis expects that the 34 Sharpy Plus in his inventory will keep busy and notes that, “we’re tempted to buy more soon.