For the German Beach Volleyball Championships on the Baltic coast in northern Germany, Lighting Designer Michael Kantrowitsch used Elation IP-rated Proteus luminaires to meet the challenging outdoor demands while fulfilling the organizer’s request for a special nighttime atmosphere. The event took place Sept. 2-5 on Timmendorf Strand. Kantrowitsch, from arsluminis lighting design, was responsible for the lighting plan, design and operation on behalf of Kupconcept GmbH of Munich.

The four-sided beach arena, built especially for the German championships, holds around 4,000 spectators and presented Kantrowitsch with a number of lighting challenges. “We were not only faced with an outdoor location directly on the Baltic Sea beach with a maritime climate and whirling sand, but also had to achieve a minimum of 1,000 lux over the entire area, although we only had very limited options for placing lights,” explains the designer. “In addition, with only two weeks from inquiry to installation, we were under real time pressure. In the end, we decided to restrict the design of the height of the lighting points.”

The solution was ultimately found in a six-point lighting design with four lights at each location. As light glare was unavoidable, six-point lighting would distribute the glare evenly throughout the whole area so that spectators’ eyes would nonetheless be able to focus. “With four other luminaire locations on the ground, we were also able to illuminate high volleyballs from below to make them clearly visible,” he said. 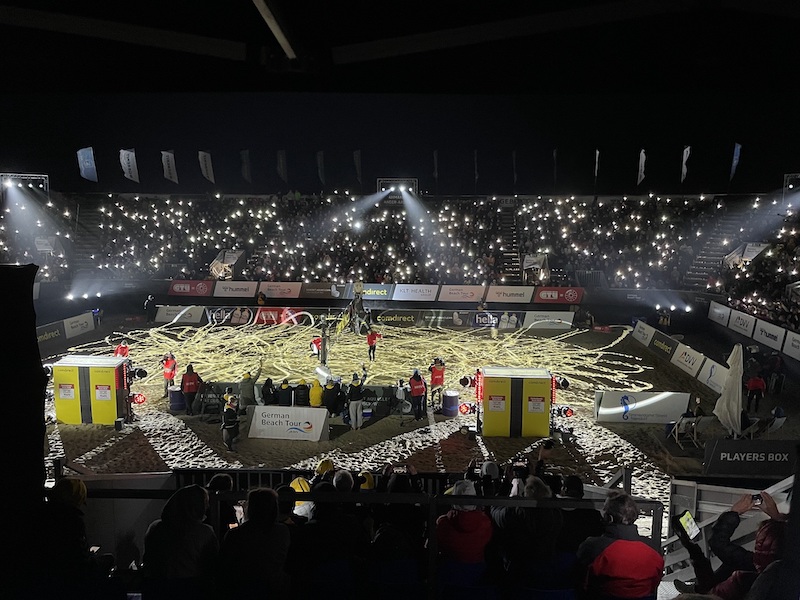 Kantrowitsch opted for 36 Proteus Maximus and 8 Proteus Rayzor 760 LED moving heads along with 8 SixBar 1000 IP, all luminaires in Elation’s market leading IP65 line. Court lighting was placed on trusses at three points on the upper tiers of the grandstands, as no additional higher structures were possible according to regulations, while on the opposite side, lights worked from three 10-meter Layher towers.

“As a result, we achieved a good light distribution and were able to achieve a really successful compromise with regard to glare and TV illumination, as well as feasibility (budget and technical). The ground set consisted of the four named lighting locations, which, in addition to illuminating the volleyballs from below, were responsible for effect lighting on the players’ dressing rooms.”

The ground-based Proteus Maximus also fulfilled the role of special lighting effect, for example when used for various ‘light jingles’ coordinated with the DJ’s set. “As it got dark and the moderators fired up the audience, I used the lights for area illumination using beams and gobos. Good effects could also be achieved at the awards ceremonies,” Kantrowitsch adds. Pyro and foggers also played a role in the show.

When choosing lights for the project, Kantrowitsch focused on its unrestricted outdoor suitability and was particularly fond of the Proteus Maximus. “I currently don’t know of any lighting fixture on the market that can compete with the Proteus Maximus in terms of design, light output, zoom range, framing and really good projection properties,” he states.