VIENNA – Through their songs, platinum Austrian recording stars Christopher Seiler and Bernhard Speer tell stories of everyday life. Lighting Designer Niklas Fuchs helps the duo with supportive visuals. He began lighting the duo in 2015, with the release of their first album, using a ChamSys MagicQ MQ100 Pro. His first show with them was at a small 750-capacity club in the Alpine resort region of Tyrol, a far cry from their more recent large festival/TV appearances.

Through all the growth, Fuchs maintains a sense of spontaneity in running lights for his clients. “I don’t use time codes; it is not part of the personality of this group,” he said. “I see it as my personal daily challenge to hit every cue at the right time. It’s much more fun behind the desk this way!”

Fuchs’ style and his pure joy in lighting was on full display this summer when he lit Seiler und Speer at the annual Nova Rock Festival in Bergenland, Austria. Each song had its own Cue Stack with plenty of bumps and effects. He also controlled three live cameras on a media server, all without time coding. Instead, he relied on his user-friendly ChamSys MagicQ MQ100 Pro supplied by MartinKames.com.

“Martin Kames was the equipment provider for this show, as he is for all Seiler & Speer shows,” said Fuchs. “The MQ100 is my trusty touring companion since I started doing lights. I learned on it from Martin Kames, trained on it, and it went through rough roads, beer showers and power failures with me. The show file for Nova Rock is based on one Martin and I created when I worked for him with this console. I’ve been using ChamSys since 2012, and have worked with various models, including the MQ500. All Chamsys products are very intuitive for me and unbeatable in performance.” 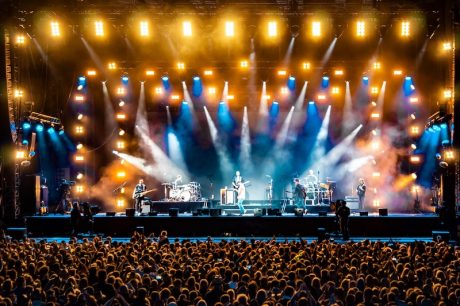 Fuchs adds that having cue stack control on a large number of Playback Faders, and being able to route his first Executor Page to the Play/Pause Playback Buttons was critical to helping him run the complex festival show.

“There are so many time-saving features to this console,” he said. “I like to be able to edit cues easily on screen. Plus the clone and merge capabilities are indispensable. We had 90 moving fixtures and tons of PARs in our 12-Universe Nova Rock show. We also has a media server running Resolume and it all was controlled with this desk. ”

The Multi-Emitter Color Picker feature of the MagicQ also came in handy during the show, which progressed through a wide rainbow of hues. However, Fuchs mostly limited himself to only a few colors on each song. “I like to not to have too many colors at once,” he said. “Generally, I stick with two. The band will have some songs that are funny party tunes, and others that are more serious, representing dramatic situations in life. All of them need to be reflected differently with color.”

Keeping pace with the twists and turns of Seiler und Speer’s storytelling music is one of the most rewarding things about lighting the band, says Fuchs. He does it with as much verve and spontaneity today at large shows as he did at that small Tyrol club where it all started.