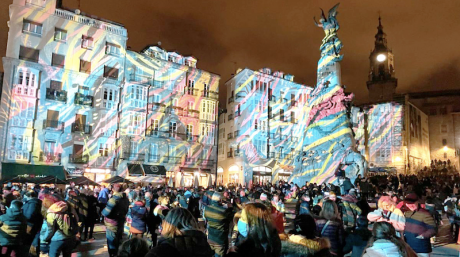 The second edition of the Umbra Light Festival Vitoria-Gasteiz took place Nov. 12-14 in Spain. The festival was born with the intention of introducing both visitors and citizens to the world of urban lighting art, in such a way that the public could experience and interact with the latest artistic and technological expressions of this field. The festival encompassed artistic expressions of digital visual art, interventions in urban space and new technologies.

The festival took place in La Almendra, in the historic center of the city, where 19 artists were able to present their works and filled the city of Vitoria with light, color and music. Digital illustrator Coaner Codina transformed the central Plaza de la Virgen Blanca into a colorful underwater space. The design created an imaginary and dreamlike world brimming with light and color that covered the ground and façades of water into fantastic creatures to emphasize the overfishing and pollution of our seas that threaten the sustainability and biodiversity of our planet.

The work of Rebeca Sánchez and Miquel Clot, based on a large structure located in the monumental Plaza de los Fueros, was made so children could interact with by dancing and jumping around the installation. This installation featured 2 Prolights PanoramaIP AirBeam.

Ezequiel Nobili, a prestigious international designer, turned the medieval wall of Vitoria Gasteiz into a poetic and harmonious landscape that revealed the union between heaven and earth. This installation featured 12 PanoramaIP AirBeam and 4 PanoramaIP WBX. The design’s message was a way of emphasizing the importance of nature for the existence of human beings, as well as an invitation to value and care for it to be able together to improve our future.