Billie Eilish at the Hollywood Bowl 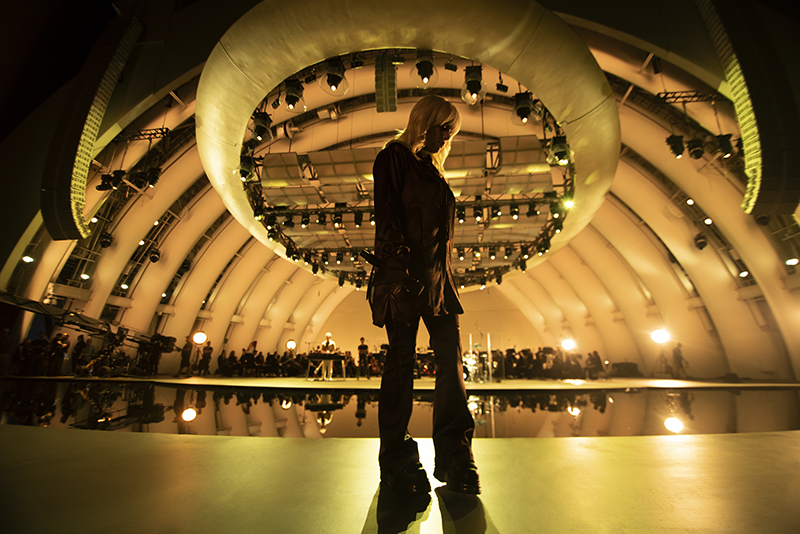 For Happier than Ever: A Love Letter to Los Angeles, Eilish evokes old Hollywood in an intimate performance filmed at the Hollywood Bowl. All Photos Courtesy Disney/Mason Poole

GRAMMY® Award-winning artist Billie Eilish continues to break new ground with her Disney+ debut Happier than Ever: A Love Letter to Los Angeles, a cinematic concert experience. The film, which started streaming on September 3 on Disney+, captures her live performance at the Hollywood Bowl sans audience with a unique format that merges animation with the real world. Directed by Robert Rodriguez and Patrick Osborne, the team filming the concert included Pablo Berron as Director of Photography and Kerry Asmussen as Live Concert Director with Tony Caporale, Eilish’s Lighting Designer/Director also taking the role as Lighting Programmer for the film.

“Billie trusts what I bring musically to the table,” says Caporale, who received the 2020 Parnelli Award for Lighting Director of the Year for his work with Eilish. “My approach has always been to find what she wants out of a show. My focus is on her no matter what the project, whether it is with a minimal lighting rig or here with major players in Hollywood. I suggested to Kerry and Pablo that I build the show as if it were a normal concert for me, and then do the specific film touches with them on site. There was all new music to be programmed and we had to move quickly.”

Caporale, Berron, and Asmussen joined forces and collaborated to deliver what were the only two mandates given them as a brief. First, Eilish wanted to create a piece that was a throwback to the glamour and classicism of old Hollywood. Second, as a number of the songs that she would sing from her album would be introduced by animation created by Nexus Studios, “Make sure the transition from animation to real was effective they told us,” recalls Caporale. Otherwise, they were given free rein to “Do whatever you need to do to break the mold.” Berron notes, “We wanted to make the best-looking concert film ever seen by shooting stuff nobody has ever done or seen before.”

“I don’t really have a particular style I work off of,” says Berron. “It’s very reactive, depending on the moment and the situation. The original concept that Billie wanted to portray was like the title says, a love letter to the old Hollywood; imagery built on the old glamour theme of classicism. As we got deeper into our pre planning I thought, look, this is a modern artist. We should incorporate classic ideas with really contemporary styles and add it to the imagery.”

Caporale describes, “A mix of modern concert lighting with old style film lights is how we got the look everyone was after. Pablo and Harrison [Lippman, project manager for lighting vendor, Volt] know about all the art of old school lighting. I just blended that with knowing how to give Billie what she wants.” With the orchestra on stage the first few days, Berron leaned towards the classical direction in lighting mood. “The old fixtures are always the prettiest in my opinion. Anytime I have a chance to light a female artist or actress, I tend to reach for the older tungsten lamps that have lit our most famous films; a 20K or a Big Eye 10K and 36-light Maxi Brutes. Harrison at Volt provided all that from Mole-Richardson.” 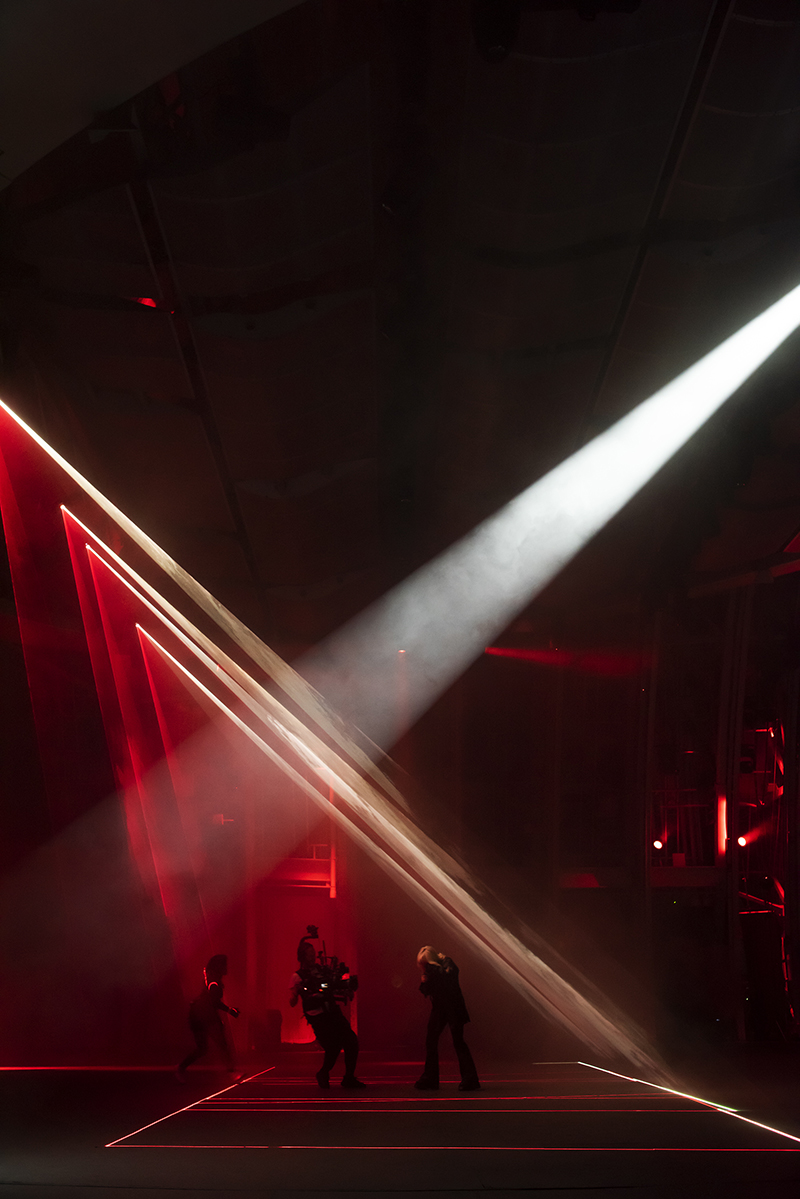 Going into the project, “I was very inspired by how there have been many amazing projection mapping shows at the Hollywood Bowl, which is where we were headed at first,” says Caporale. “Still, I wanted to do something different and was struck with the idea of lasers.” Nexus Studios’ content provided Caporale with some direction by the very nature of the animation and colors rendered for the animation segments leading into many of the live concert scenes. “The animation helped me formulate the raw idea to light each song.” One scene the animators previewed for him in particular, that of Eilish’s taillights streaking through the L.A. night as she is driving to the Hollywood Bowl, prompted the laser concept. This path of collaboration was key throughout the process to Caporale bridging the animated and live segments.

Laser banding, a bending effect created by the interplay between shutter speed of the camera and the refresh rate of the laser, was used heavily in the song “Oxytocin.” “With the emergence of laser banding that can be captured on film now, I asked to get lasers from Strictly FX,” says Caporale. “The fact that we had no audience to worry about allowed us to capture lasers on film like it has never been done before. We could point them anywhere… well, within reason.” 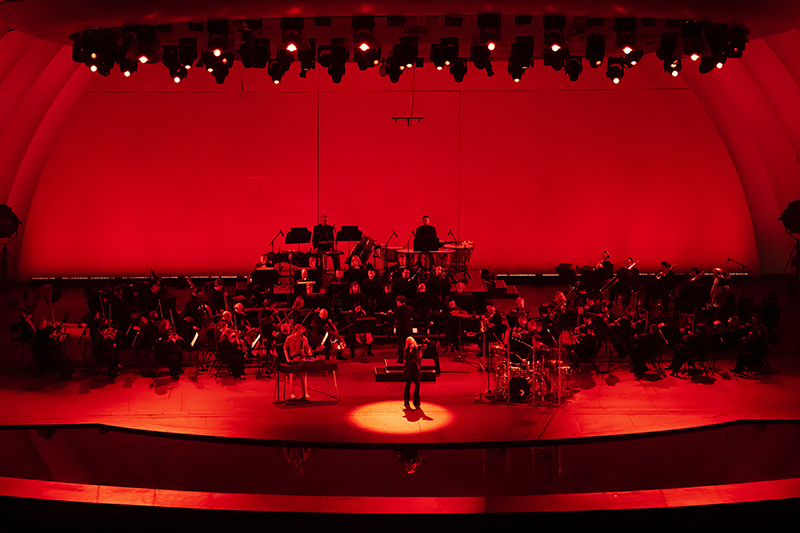 Eilish, backed by a full orchestra, performed each song from her Happier than Ever album for the film without an audience. Photo courtesy Disney/Mason Poole.

David Kennedy, the Strictly FX operator for the lasers, ran the show on a Pangolin Beyond, a live laser show engine, with Strictly’s bespoke E-Stop proprietary system. There were a total of eight 15W lasers; four in the air and four on the floor. They did use 12 Matrix audience scanners, which when turned off from audience mode are brighter than a typical laser. “A lot of the time banding is shown very slowly,” notes Kennedy. “Pablo is a very energetic fellow and I love his style of shooting. He used the laser effects in in a much more rapid sequence; something you don’t see very often.”

For “Oxytocin,” Berron suggested the floor lasers get placed downstage between the empty audience seats and Billie, who performed facing upstage. This created a unique halo effect with laser beams shooting down from the upstage air units and the downstage floor units. “It was nice working with Tony and working with a cohesive color palette,” says Berron. “He is very in tune with the colors Billie likes for songs. Nicole Massy, her PM is amazing. People don’t generally think of a PM as a creative position; she definitely is. She was definitely a bridge because she knows her artist so well.”

Caporale echoed that point. “My favorite song in the film is ‘Oxytocin.’ Pablo had the idea that he just wanted to shoot her neutrally. That song looks the most like a music video, but in a good way. The way they cut it, the way we used angles, the striated beams in red. With her performing to the upstage area, without the orchestra in place, we had so much space to work with. We crammed a bunch of VL6000s in the two load-in doors up center.” 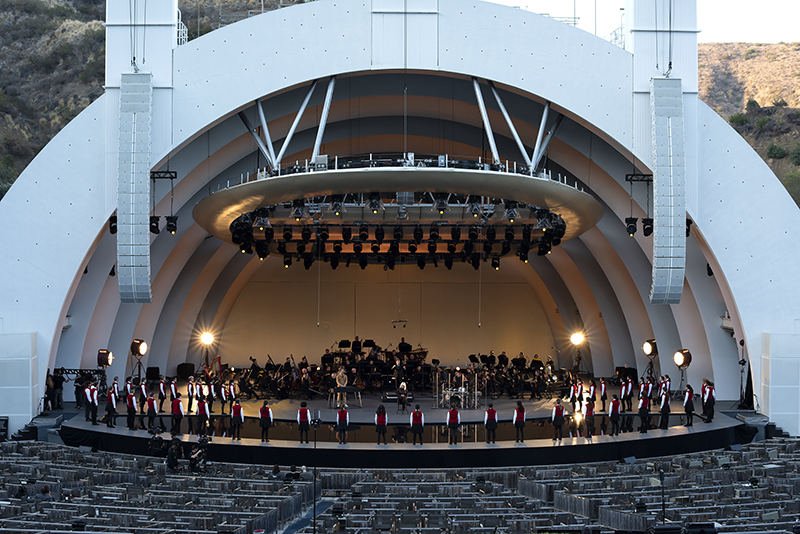 Old school film lighting was incorporated into the design on the stage. Photo courtesy Disney/Mason Poole.

Any Way You Look

Since this was to be a cinematic concert experience and not a live audience experience, Berron wanted to be able to point the camera in any direction, doing 360’s or turn-arounds to shoot the other way. “I did not want to limit myself to one direction,” he says. When Billie and the band took the stage, he did just that, sticking her on a dolly, shooting her face up close with a wide-angle lens. “That is very out of the norm. With live music, there is an audience, and you can’t obstruct their view by shooting the way we were able to.” Berron’s goal with this approach was to make the viewers at home feel like they were three feet away from Eilish. “The challenge was, how to explode the elements given us into the most visceral immediate concept. We were able to do all this because we had a nice, coordinated group effort. A lot of dynamics were worked out between Tony and I.” 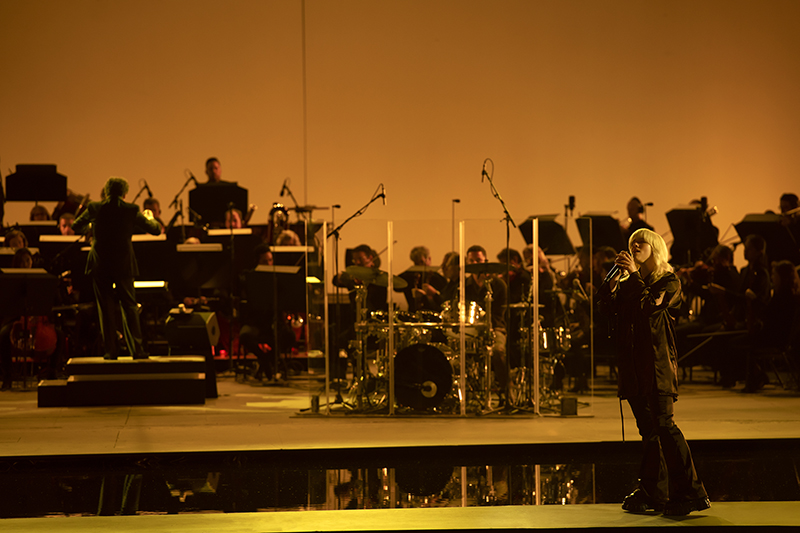 Eilish on the apron of the Hollywood Bowl. Photo courtesy Disney/Mason Poole.

The two came up with the term “backflip” to flip the key lighting so it reacts to where the camera is. Whenever Berron needed the backlight to change direction for the camera, he would say “backflip!” on coms for Caporale to make his move. “Tony was super helpful by allowing me to change the shooting direction while also keeping the lighting backlit and not ever crossing key light or causing shadows. I wanted to keep the lighting edgy. For me, it was all about turning lights off and never having a steep directional key light on her.”

Berron also utilized the backlight from Caporale’s approach to lighting the bandshell of the stunning Hollywood Bowl. Caporale had early on determined they could use the existing lighting rig to accentuate the iconic structure itself because the house system, a newly installed LED rig from Volt, beautifully emphasizes the architecture of the shell. “This way we see Billie performing within this space,” points out Berron, “instead of isolating her with traditional spotlights. Having the entire Hollywood Bowl at our disposal, not worrying about blocking audience and seat kills allowed us to take these broad brushstrokes given us and really create something completely different.” That included a temporary four-inch-deep pool built by All Access, who handled the staging for the shoot. The pool in the orchestra pit mimics the original design from the 1920s. Asmussen states, “Pablo and I pulled Billie out on the apron and the reflections we got from her and the architecture with Tony’s lighting were gorgeous.” 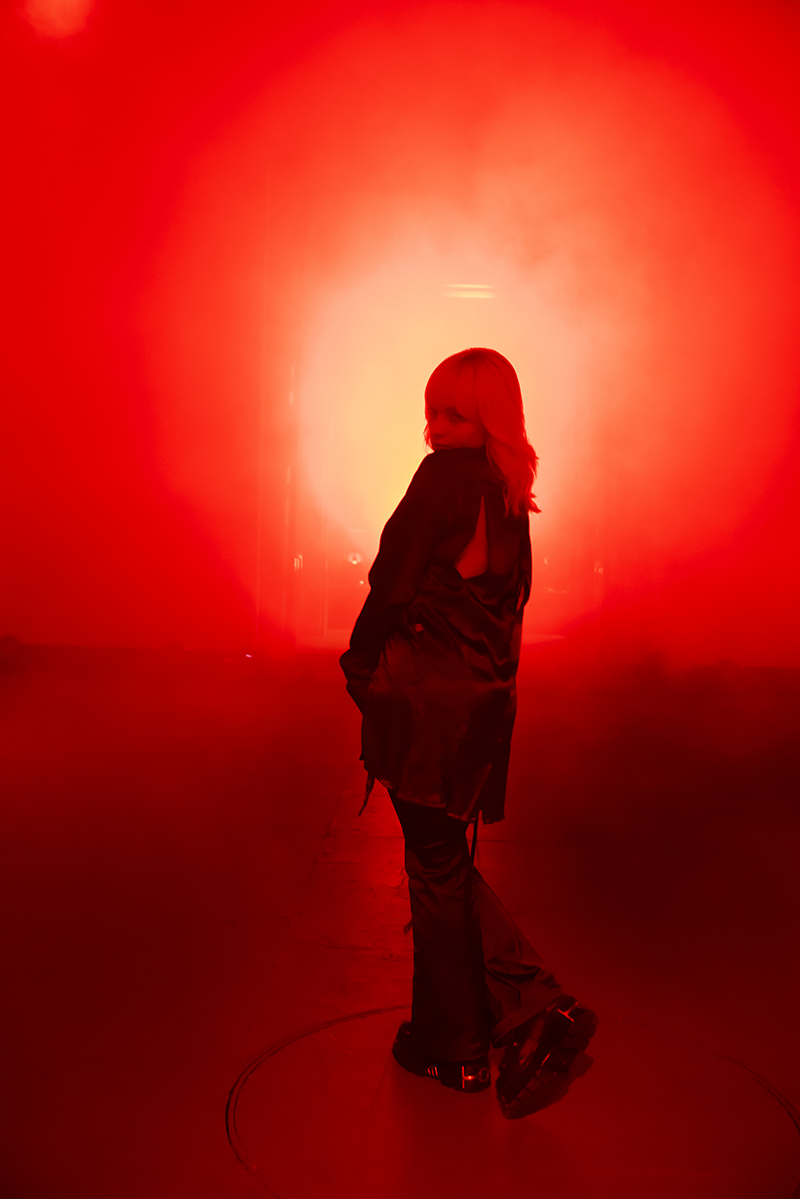 DP Pablo Berron was free to film from from any angle without worrying about blocking sightlines from a live audience in the venue. Photo courtesy Disney/Mason Poole.

“Being a film guy and a concert guy at the same time was a challenge,” says Caporale. “By that I mean I know how to light a rock concert and I have worked on film shoots, but I have never been on a project where the two disciplines are merged. I have to train my mind to work a different way when working with film. It’s a whole other approach I had to beat into my head.” Berron laughs, noting, “I was a little apprehensive going into this project. I have worked with plenty of concert lighting directors and have found them very set in their ways. Tony was a real blessing on this project. I told him in the beginning ‘I want to help you, help me.’ He was open, willing, and talented enough to do what we needed for the shot.”

Caporale, Berron and Asmussen all appreciated the experience of working on this film. “It was an incredible opportunity in an amazing venue with an amazing artist and fantastic crew,” comments Berron. “The label really let us do pretty much whatever we wanted to do. Billie and Finneas [O’Connell, Eilish’s brother and collaborator] were totally open to our ideas, and Robert Rodriquez gave us an open field too. The time Tony, Kerry and I spent on Zoom in prep work and bouncing some very wacky ideas off each other, really helped us achieve that rare thing; making the artist, producers, and ourselves happy with the final product. Of course, the editors were incredible in cutting this to the final look in the film.”

“I’m so grateful,” says Caporale. “I’m so thankful for everyone’s contribution to this once-in-a-lifetime project. Biggest thanks to Billie Eilish, Finneas, and the family. This has been a dream project to be able to do; to be a part of something so unique. With all the beautifully creative minds that I’m working with on this particular project, to be able to contribute anything is an honor.” And Asmussen agrees. “This was a special project. A lot of times producers will say they want something new and different, but they invariably fall back to the norm. This experience was nothing like that. The film looks amazing, and I couldn’t be happier with the way it turned out.”

Billie Eilish’s Happier than Ever: A Love Letter to Los Angeles